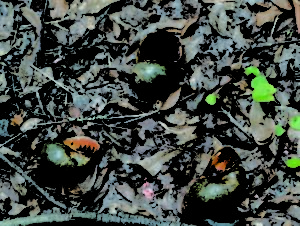 What are these and what birds eat them?

Limpkins (Aramus guarana) feed primarily on apple snails (Pomacea sp.) and freshwater mussels. The limpkin searches visually for snails in clear water, or by jabbing or sweeping with its bill. Once found, it turns the snail shell opening upward. It cuts through the muscle attachment and pulls out the snail in about 10 to 20 seconds. The shell is rarely broken.

Here is one of the Cornell website’s “cool facts.” It states, “The limpkin’s bill is uniquely adapted to foraging on apple snails. The closed bill has a gap just before the tip that makes the bill act like tweezers. The tip itself is often curved slightly to the right so it can be slipped into the right-handed chamber of the snail.” 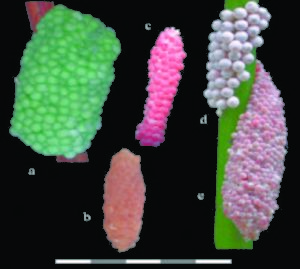 Cornell Lab of Ornithology (here you can listen to the limpkin’s unmistakable call). The sound of several males counter calling has been described as “one of the weirdest cacophonies of nature” (Sprunt 1954: 141).

Limpkins were once quite abundant in Florida but were almost totally eradicated by food-hunting humans. Further decline of limpkins in Florida, estimated at about 9.1% per year from 1966 to 1993, is primarily due to conversion of wetlands for development and agriculture.

Applesnails (Pomacea) are larger than most freshwater snails and distinct from other freshwater species by their oval shell which has the umbilicus (the axially aligned, hollow, cone-shaped space within the whorls of a coiled mollusc shell) of the shell perforated or broadly open. There are four species of Pomacea in Florida, one of which is native and considered beneficial (Capinera and White 2011). Of the four species of apple snails in Florida, only the Florida apple snail is a native species, while the other three species are introduced.

Pomacea paludosa (Say, 1829), the Florida apple snail, occurs throughout peninsular Florida (Thompson 1984). Based on fossil finds, it is a native snail that has existed in Florida since the Pliocene. It is the principal food of the Everglades kite, Rostrhamus sociabilis plumbeus Ridgway, and should be considered beneficial.

It cannot survive low winter temperatures that occur in the northern tier of Florida counties and northward except where the water is artificially heated by industrial wastewater or in warm springs. It occurs as far west as the Choctawhatchee River. It is easily distinguished from other apple snails in Florida by the low, strongly rounded shell spike, and measures about 40–70 mm (Capinera and White 2011).

“Therefore, if anyone is in Christ, he is a new creation.The old has gone, the new has come!” — 2 Corinthians 5:17