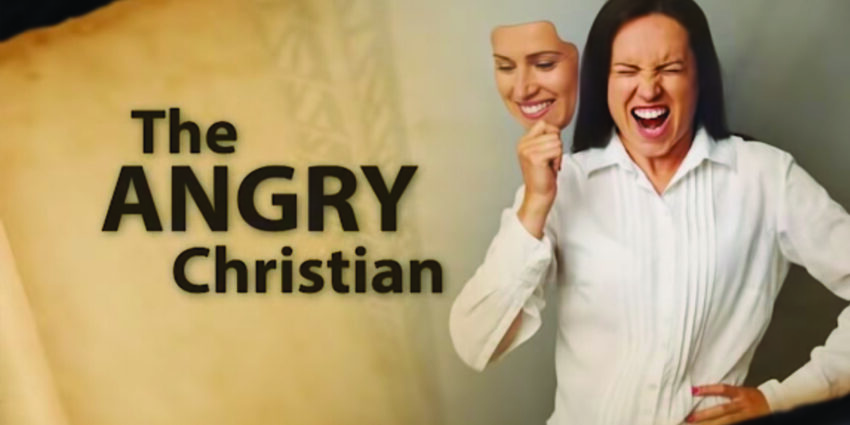 Anger is a very serious issue, as you can see when you read the book of Genesis 1:14-16 about the two sons of Adam, Cain and Abel. Cain was a farmer and Abel was a shepherd, and each made an offering of their own produce to God. But when God favored Abel’s offering over Cain’s, Cain became angry.

God asked Cain, “Why you are angry?” and Cain’s heart became darker, which led him to murder his brother and to lie to God. Then God placed a curse upon him.

Jesus tells us in Mathew 5:22 “But I say to you that whoever is angry with his brother without a cause shall be in danger of the judgment!” Meaning obviously there may be a time when anger is appropriate.

1 John 3:12: “Do not be like Cain, who belonged to the evil one and murdered his brother. And why did he murder him? Because his own actions were evil and his brother’s were righteous.”
Who’s wrong and who’s right is all that people need sometimes to become angry. If anger and sin is at your door this would be a good time to deal with it. Cain’s feeling unappreciated by God was not a sin. But allowing his anger to boil out of control and murdering his brother and lying to God was.

Sometimes people can become unrecognizable to others and yourself if we are not able to circumcise our flesh from the spirit.

This can be an impossible task if you’re angry at God, too. At this point you may have intervention like when Jesus healed a demon-possessed man in Mark 5:1-20. 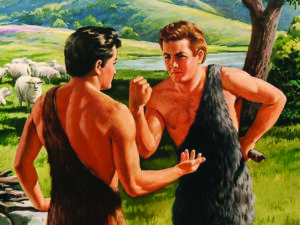 Jesus commands us to watch in 1 Corinthians 16 and Matthew 24. But all that people are watching is the news and the fake news trading punches. Was there any Russian involvement in our election or any collusion at all? Was Stormy Daniels paid $130,000 dollars for her story? And why did we punish 2,000 children by ripping them away from their parents? In Mathew 19:14 Jesus said, “Let the little children come to me, and do not hinder them, for the kingdom of heaven belongs to such as these.”

It’s interesting how we will pledge allegiance to our flag as our nation then fall short of what Jesus did for us. If he is our Father and we are His children, we need to think about our anger when we offer up punishment to our children when they become disobedient.

Such as time out, go to your room, no supper for you to night, or some may just kick them out of the Garden of Eden all together saying “You’re not going to act like the devil in my house, so get out until I come for you.” You do this because you want them to think about what they had done. 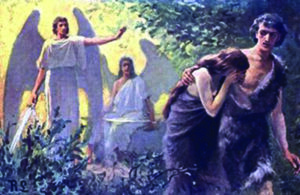 My father, who I love and who recently passed, was a bull-necked belligerent man in his day! But, if you were to ask any one who knew him, they would say he was the sweetest man they knew as “Sam the telephone man.” But if you were to cut him off in traffic, he definitely would give you a mouthful. Sometimes we will say, “The devil made me do it.”

Either way, God allows us to repent from our anger that brought us to sin and gives us a mulligan and says, “Get up and try again so that you may be ready when I come.”

When you’re being challenged, try saying “I work for Him.” Because until that day there are always going to be people talking rhetoric just to hear there own voice. Some think they are going to shoot their way into heaven like they’re in the Wild, Wild, West.

But as for Cain and Abel, it was about who was wrong and who was right. We feel it the most when it involves someone we love. Kay and I often cross those bridges and we learned that our opinion does not matter, because Jesus is always right!

John 3:15: “Whoever hates his brother is a murderer and you know that no murderer has eternal life abiding in him.”
What is anger? It’s a strong feeling of displeasure, belligerence, hostility, or wrath aroused by some real or perceived wrong.

Romans 1:18: “For the wrath of God is revealed from heaven against all ungodliness and unrighteousness of men, who suppress the truth in unrighteousness.”

The question here is does God ever get angry? You might be surprised that there is good anger, because we are made in the image of God, of the passion of righteous indignation with an appropriate amount of emotion and anger towards just purposes. 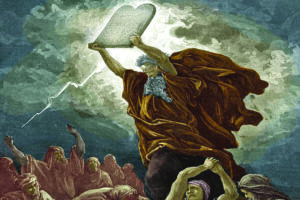 Exodus 32:19: “When Moses approached the camp and saw the calf and the dancing, his anger burned and he threw the tablets out of his hands, breaking them to pieces at the foot of the mountain.”

When he saw this, his anger waxed hot and he was outraged after they had just made a covenant with God and Moses had the Ten Commandments, God’s writings, still radiating in his hands.
He goes to the people and finds them breaking all Ten Commandments. Then, you have to ask yourself, was this the right kind of anger? The early church father, Chris Adam, said “He who is not angry when he has cause, sins for unreasonable patience and is in the hotbed of many vices.”

Mark 11:15: “So they came to Jerusalem. Then Jesus went into the temple and began to drive out those who bought and sold in the temple, and overturned the tables of the money changers and the seats of those who sold doves.”

He would not allow anyone to carry wares through the temple and said, “You’ve made my Father’s house a den of thieves!” Hopefully the pastors will not ever have to go as far as in Nehemiah 13:25: “So I contended with them and cursed them, struck some of them and pulled out their hair, and made them swear by God, saying ‘You shall not give your daughters as wives to their sons of the pagans, nor take their daughters for your sons or yourselves.’” 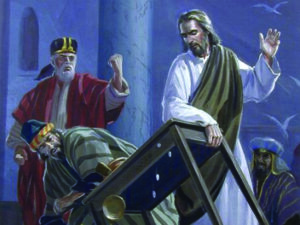 Nehemiah was saying, “This is how we got carried away off to Babylon in the first place and you’re starting to do it again!” and he flew off the handle.

John Wesley said, “He that would be angry and sin must not be angry with anything but sin.” Meaning the righteous anger is the anger against sin. Martin Luther became angry at the church’s abuse of power, saying “When I’m angry, I can write, I can pray, I can preach well, for my whole temperament is quickened and understanding is sharpened,” and you could feel and see Luther’s animated nature.

Aristotle put it this way: “Anybody can become angry, that’s easy, but to be angry with the right person to the right degree at the right time for the right purpose, in the right way, that is not within everybody’s power and it is not easy.”

A lot of the time we think that our anger is the righteous anger, but it’s not. More often we get angry when we are challenged about who’s wrong and who’s right, just as when Peter challenged Jesus, saying “I’II die for you.”

Matthew 26:34: “ Jesus said to him, ‘Truly, I tell you, this very night, before the rooster crows, you will deny me three times.’”

Potiphar’s wife became angry. When Joseph would not accept her advances she was willing to send him to jail. Some anger doesn’t happen all at once because we have this mini storage department in our mind of these little offenses, saying it’s no big deal. Then later when something else happens, they pop up like frequent flyer miles sending you on a free trip to anger land. You may know someone like that.

1 Timothy 6:4: “He is proud, knowing nothing, but is obsessed with disputes and arguments over works, from which come envy, strife, and reviling, evil suspicions.”

Anger destroys communication, generates fear, scars relationships, and creates bad health. Oh, and let’s not forget those who are still angry with people that are dead. They feel if they let go who is going to stay angry with them, not knowing they are destroying themselves with their anger.

Tyson got so angry that he bit off a piece of his opponent’s ear and lost millions. Showing anger can be expensive, and people who lose their temper seem to always have to have something or someone to blame. But most of the time there is no good excuse.

Though an appropriate amount of emotion and anger towards just purposes may be necessary, one needs to stay on alert because your anger is basically giving yourself over to the devil and later you may regret it.

Proverbs 25:28: “Whoever has rule over his own spirit is like a city broken down, without walls.” This means you’re allowing the devil access to your life.

Ecclesiastes 7:9: “Do not hasten in your spirit to be angry, for anger rests in the bosom of fools.”

Notice how Solomon said, “do not hasten in your spirit. He doesn’t say you should never be angry but do not be hasten to be angry, for anger rests in the bosom of fools. Thomas Kemp said, “When anger enters the mind, wisdom departs. I say an angry man is seldom reasonable, and a reasonable man is seldom angry.”

People who are always giving someone a piece of their mind should be careful, because if you giving away enough pieces, it may affect your IQ. So for the Angry Christians if you making a stand on humanity like Jesus did, remember you may also be leaving yourself open to the devil and you to may find yourself saying, “The devil made me do it.”

But nevertheless, you and your anger are still in good company because I heard an angry man who once said “You’ve made my Father’s house a den of thieves,” and He was Jesus Christ.
Matthew 22:21: “Jesus said ‘Render to Caesar the things that are Caesar’s, and to God the things that are God’s. For there is no authority except from God and those which exist are established by God.’” 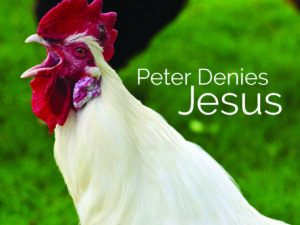 Matthew 16:24-26: “’So take up your cross.’” Then Jesus told his disciples, ‘If anyone would come after me, let him deny himself and take up his cross and follow me. For whoever would save his life will lose it, but whoever loses his life for my sake will find it. For what will it profit a man if he gains the whole world and forfeits his soul? Or what shall a man give in return for his soul?’”

So if you are going to get angry, let them know by your vote!
“What Would Jesus Do?”