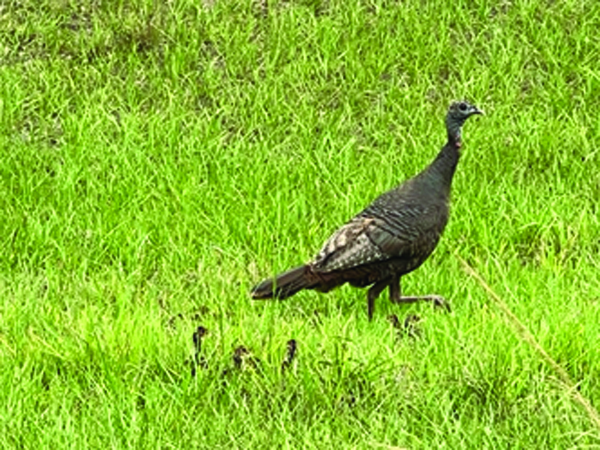 Dr. Robert Norman, Clinical Professor, Dermatology, Nova Southeastern University While hiking and biking near Trout Creek, my friend Ed and I spotted a beautiful wild turkey— Meleagris gallopavo. Upon closer inspection I noted the wonderful creature had about ten furry little brownish-blonde balls following her wherever she went.

During many adventures we have seen the wild turkey foraging in leaflitter in open areas or at the edges of forests. They spend most of their time on the ground, where they search for acorns, seeds, fruits, insects, leaves, and small vertebrates, and can easily cover several hundred acres in a day. 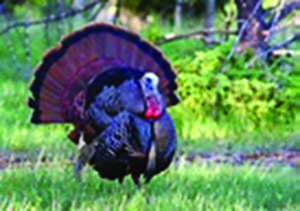 Wild turkeys are powerful fliers, especially for short distances; speeds of up to 55 mph have been observed. To conserve energy, wild turkeys primarily walk.

Wild turkeys are social animals and typically flock together in groups numbering just a few birds to as many as 20 or more. They are extremely wary and will run away or fly to a tree to escape danger. For safety from ground predators, wild turkeys roost at night in trees within thicker forest stands.

Courtship occurs during spring. The male, also known as a gobbler or tom, will strut, fan out its tail, and gobble to attract hens. During these displays, the skin on the male wild turkey’s head turns bright blue and white, and the caruncles become swollen and turn bright red.

Wild turkey hens in Florida typically begin nesting in late March or early April. The female builds a shallow nest on the ground where she lays an average of 9 to11 eggs. It takes approximately 12-13 days to lay the full clutch of eggs and another 25-26 days of continuous incubation for them to hatch.

Newly hatched wild turkeys, called poults, are highly mobile and can feed themselves soon after hatching. Poults are flightless until they are about 2 weeks old. Until they are able to fly into low branches or small trees at about 4 weeks of age, they roost on the ground under the hen’s wings and tail.

Wild turkeys are large birds with long legs, wide, rounded tails, and a small head on a long, slim neck.

An adult male wild turkey is more heavy-bodied and larger than the female.

The skin on its featherless head is pinkish-red with red caruncles (wattles) on its throat and neck. It has a dark beard on its breast and dark brown or bronze iridescent feathers.

The female is slimmer and duller looking, with a blue-gray head and neck that lacks the prominent red caruncles of males. Females usually do not have a beard, but if one is present, it is thinner and smaller than the males.

Its colorations and behavior are ideal for the flat pine woods, oak and palmetto hammocks and swamp habitats of Florida.

The wild turkey is a woodlands bird and prefers open forests and forest edges and openings.
They are considered a generalist species meaning they do not require specialized food or a particular vegetation community to survive. Consequently, they occur throughout Florida in any suitable habitat.

Females are smaller than males and not as brightly colored.

How long has the turkey been in Florida? Turkey fossils older than 5 million years have been found throughout the southern US.

Where do you find wild turkeys?

Get out into The Great Florida Outdoors!