After finishing a hike along Cowhouse Creek, my friend Ed pointed out the numerous and multi-shaped holes in certain nearby plant leaves. On closer inspection, we could identify the air potato vines and the red and black beetles earning a living by feasting on the invasive plant leaves.

As Mark Govan, the host of “Florida Gardening” on 970 WFLA Live (he passed away at age 60 after having either co-hosted or hosted the longtime Sunday morning show for more than two decades) pointed out, “We have all seen them clinging to our plants, fences, and even trees. They start out small but rapidly grow in size to cover entire landscapes. Yes, I am talking about the air potato vine (Dioscorea bulbifera). This heart-shaped vine is found in just about every garden or landscape. When left unchecked, this trailing vine can grow over eight inches a day to seventy feet in length. The more of these vines you have in your landscape, the better the chance you will have of losing the plants this vine clings to.”

As Govan stated, since 1993 the air potato has been identified as one of the most invasive plants we have that can also disrupt the natural flow of wind and water. Air potatoes have unceremoniously made Florida’s 2017 Exotic Pest Plant Councils “Category 1” list of the invasive plant species. “This non-native vine spreads by twining itself to available foliage and then climbing to the canopy of trees increasing the plant’s wind resistance. The dense coverage of this vine is also responsible for the sharp decline of native vines and foliage. As wind speeds increase, or when thunderstorms pass through an area, the additional twisting and turning of their limbs can cause them to break and fall to the ground. These vines can then re-root and start the process all over again. Additionally, scores of potato-shaped aerial tubers can break off the vine and fall into neighbor’s yards and begin to grow. Aerial tubers closely resemble yams or small potatoes. These tubers are produced in the axils of the leaf, and a typical stem could support dozens of these. People trying to remove the vines tend to dislodge the tubers, which fall to the ground,” Govan stated.

Govan had first tried soaking the vines with Roundup but was unimpressed with control level. He found a new solution. He stated, “The University of Florida in conjunction with the Department of Agriculture and Consumer Services has come up with a natural bio-control solution for these vines. They have released over six hundred thousand predator beetles, which were found in China and Nepal. Since the release of these beetles, many air potato vines have been decimated and populations of these beetles have been rising in areas that they have been released. The air potato vine is the only food source of these bright-red beetles, so you do not have to worry about them moving to other crops.”

Here is more from Govan. “The best part about ordering these beetles is that this is a free service. The Department of Agriculture will send you a small vial of twenty-five to fifty beetles that you can release on your property for FREE. Yes, that is correct. These beetles are absolutely free to you, and you can order them by copying this address below into your computer’s browser.
http://bcrcl.ifas.ufl.edu/airpotatofiles/airpotatoforms.shtml

I tried this site and it did not appear active. But you can go to many actual sites in nature where air potato vines are hosting these bugs and get your own.

Once they are released in your yard, the beetles go right to work feeding on the leaves of your potato vines. They will also start to reproduce by laying eggs for future generations. When the leaves do not have the ability to produce food for the vine, the plant will die. When you have sufficient numbers of beetles in your yard, you will be able to share some of the immature beetles with friends of yours who are also fighting this problem. Just take a few leaves with beetles on them and use a clothes pin to attach them to your vine. 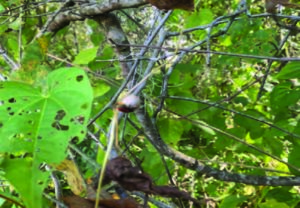 This program began in 2014 as an initiative by the UF/IFAS Indian River Research and Education Center and the UF/IFAS Extension St. Lucie County in collaboration with Extension offices and partner agencies throughout Florida. The focus of the project involved the introduction of a new biological control agent Lilioceris cheni (Coleoptera: Chrysomelidae) and to teach residents how to use the insect to manage the invasive air potato (Dioscorea bulbifera). Floridians struggled to control this invasive vine which can grow up to eight inches per day and smother native vegetation. This UF/IFAS research and extension program was paired with a mass rearing effort and distribution process that helped citizens throughout Florida. Researchers at USDA ARS are credited for discovering L. cheni as a viable biological control agent for air potato. 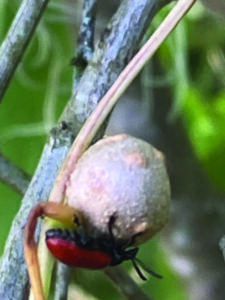 The Air Potato Biological Control Extension Program was recognized with three national awards and one state award. While UF/IFAS has completed research and extension activities with this project, educational resources will continue to be made available online at http://bcrcl.ifas.ufl.edu/airpotatobiologicalcontrol.shtml

Get out into The Great Florida Outdoors!
There is so much to see and learn!