Connie Lindsay, founder and Chief Executive Officer of Liberty Manor for Veterans, has a heart to help the brave veterans who have protected our country over the years. She knew that many veterans become homeless due to an injury or mental trauma that caused a loss of employment and wanted to find a way to help the veteran through this difficult time. In 2006, she opened Liberty Manor with the goal of providing housing, career guidance, and for those unable to work due to an illness or injury, assistance in filing the necessary forms for government aide.

“These men have fought for our country, and we just want them to know we appreciate everything they have done for us,” said Connie. “None of our guys have addiction problems, and the Veterans Administration didn’t have a category for them, so they were unable to help them. They sort of fell through the cracks.”

Harold, a World War II veteran, had nowhere to turn. Harold’s Social Security checks were suspended for two months and no one was willing to accept him. He was placed at the Salvation Army where he had to sleep in a room with 60 other people. He would have to leave at 5am and wander the streets until he could return at 3pm. Liberty Manor received a call and changed his life. They opened their hearts and home to this deserving veteran.

Tim served in Desert Storm with the US Army. He was injured when the helicopter he was in crashed. He was medically discharged and returned to the United States without funding. It took over a year before he was approved for a 100% VA service-connected pension. Prior to arriving a Liberty Manor, he was living on the streets and sleeping under bridges. 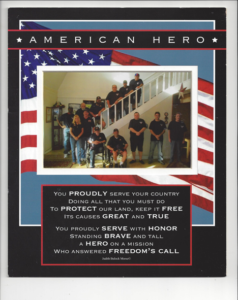 Thanks to Liberty Manor, these brave men that have served our country now have a home. Please consider partnering with this organization. Your donations help to feed and clothe the residents of Liberty Manor and to maintain the property. A van was donated to the facility to use to take residents to doctor appointments and job interviews. Donations of gas gift cards will help to support the mission.

Volunteers are needed to help in meal preparation for the veterans. The food is provided and all that is required is for you to cook it for them (in your own home) and bring it to the veteran’s home at mealtime.

For more information about becoming a partner or to assist in meal preparation, go to http://www.libertymanor.org/.