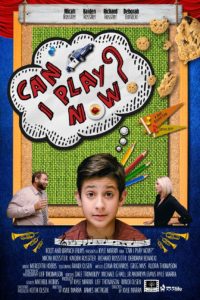 Following its win at TBUFF, Can I Play Now? was screened at the Sunshine City Film Festival at the AMC Sundial in St. Petersburg, Florida on January 19, 2020 where it was crowned the winner of the Best Indie Short Award during their awards ceremony the following day.

The film’s writer and director, Kyle Marra, had this to say, “It feels good to see the film resonating so strongly with audiences and judges. This is our sophomore effort as a company, and we are still learning and growing. It’s nice to know that we are on the right track.”

Can I Play Now? was also an award nominee in the Golden Earth Film Festival, and a semi-finalist in the Continental Film Festival and the Alternative Film Festival.

Can I Play Now? will finish its festival run in May and is currently available for streaming on www.rootandbranchfilms.com/films/can-i-play-now where you can also find the trailer and a two behind the scenes featurettes.

Live Oak Theatre Company (LOT) is a not-for-profit 501 (C) (3) repertory company of local artists, located at the Carol and Frank Morsani Center for the Arts, 21030 Cortez Boulevard, Brooksville, FL 34601. The Live Oak Theatre Company exists to enrich families, individuals and the community as a whole by providing positive artistic experiences in the Performing Arts – including excellent, affordable, and edifying family friendly entertainment, performance, and educational opportunities for Theatre patrons and participants of all ages.

For more information about the Live Oak Theatre Company, including sponsorship and audition opportunities, call 352-593-0027, email liveoakboxoffice@gmail.com, or go to www.LiveOakTheatre.org. Visit us on Facebook at https://www.facebook.com/LiveOakTheatre

About Root and Branch Films: Root and Branch Films is composed of a group of people who have a strong desire to express their creativity through film. Our team includes writers, cinematographers, editors, composers, graphic designers, actors, and directors. In short, our goal is to make quality films from start to finish.