The best way to distinguish between Saw palmetto and Sabal palmetto is to look at the leaves up close. 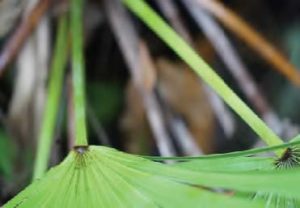 Saw palmetto has a petiole with serrate margins (be careful), thus its common name. Sabal palmetto have entire petioles. Take a close look at the apex of the leaf rachis. In Saw Palmetto, the apex is blunt, whereas in Sabal palmetto, the rachis is spear shaped. You may also see the filamentous, stringy attachments to the sabal palmetto.

The Saw and the Sabal are the two most common Florida palmettos. The other two are both in the genus Sabal and have petioles without serrate margins. Sabal minor (Dwarf palmetto) may look similar to Sabal palmetto but is a much shorter plant with smaller fruits. The Dwarf palmetto is found in moist soils and wetlands and the trunk typically remains underground. Sabal etonia (Scrub Palmetto) is a Florida endemic and is found in dry, sandy soils in scrub habitat. If you examine the leaves, you will note they are smaller and have narrower segments than either Sabal palmetto or Sabal minor. Like Sabal minor, the trunk is also subterranean. Sabal etonia doesn’t grow more than 3-6’ tall.

While hiking recently at Myakaa State Park, I explored what appeared to be an entire forest of ancient saw palmettos (see photo). If you think of long-lived plants, bristlecone pines or coastal redwoods may come to mind. However, recent evidence suggests that the saw palmetto can achieve a ripe old age measured in thousands. Although there are no annual growth rings, a team of researchers using creative mathematics accomplished the task while studying in the Mid-Florida ridge. The job gets even more complex given that saw palmettos are clonal. As they grow, their sprawling stem will often branch out and create clones of themselves. The trunk portions that connect these clones rot away over time, giving the impression that they are unique individuals. DNA evidence allowed the research team to reconstruct the growth history of many of these clones and gave them the opportunity to more accurately age these clonal colonies. 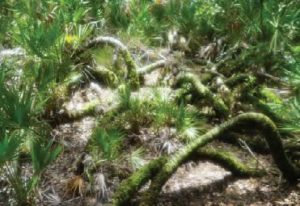 Based on the rate of growth and spread, the estimated age of these clonal patches of saw palmetto in the study ranged anywhere between 1227–5215 years. The estimates were quite conservative given that they only used the growth rates of adult saw palmettos in calculating average growth rates, therefore probably underestimating the growth time of these clonal colonies. Seedling saw palmettos have been shown to have a reduced growth rate compared to adults, only 0.3 cm per year, so they did not take into account the time it takes for seedlings to reach maturity. If included, the research team estimated that accounting for such variables could increase the age estimates for such clonal patches to well over 8,000 years!