God took the time to write the Ten Commandments in granite with his own finger. As Christians, is this something that we should think about today? In Roman 6:14, we can read that we are no longer under the law but under grace.

Does that mean that Christians no longer have an obligation to keep the Ten Commandments? In the story of Daniel and the lion’s den in chapter six it may help us to understand the Biblical relationship between salvation and the Law of God and how it all fits together. 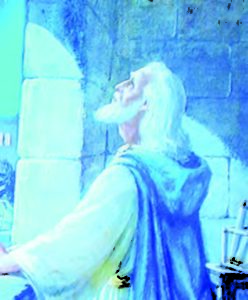 After the Babylonian kingdom fell to the Persians, the new king, Darius, was very impressed with Daniel’s ability and his high spirit, and he was thinking about making him the Prime Minister of his new kingdom.

So they came up with a plot and went to Darius and said, “Your Highness, a new kingdom is now being formed now that we have conquered several other empires, and the best way to get everyone all together will be through common worship. So in order for you to get this new kingdom all together, you will need to make a new law.

It doesn’t have to last long, but just for thirty days nobody will worship any god or man except for you and this will solidify your kingdom.” Often the devil uses common worship and common language to do that.

So if you read in Daniel 6:8, he signs the decree that no one is to pray to any god or man for thirty days or they would be cast into the lion’s den. King Darius never thought that anyone would ever break his law because once the king signed the decree, it could not be changed.

When Daniel heard about the signing of the decree, knowing the penalty, he chose not to hide his faith, so he went into his house and opened up his windows facing toward Jerusalem on his knees and gave thanks to his God as written in Daniel 6:10.

Soon after, the cabinet members went to the King Darius and said to him. “You know someone in your kingdom just doesn’t care about your new law. It’s that Daniel. He’s been praying three times a day.” With a heavy heart and knowing that he could not change the law, he gave the command to cast Daniel into the lion’s den. The king spoke to Daniel, saying, “May the God whom you serve deliver you.” And he had the stone put over the lion’s den with a government seal in Daniel 6:16.

The next morning, the king had the stone removed and said, “Has your God 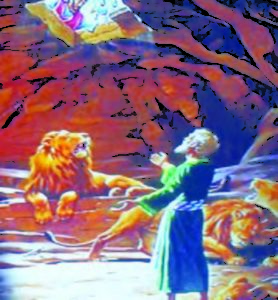 delivered you from the lions?” Daniel cried out, saying, “My God has sent angels to shut the lions’ mouths.”

Because Daniel knew one of the Ten Commandments says that “you shall put no other God before me.” Not even King Darius, not even for thirty days. Daniel was showing with his life that by keeping this law no harm would come to him and that he was willing to die rather than to disobey the law.

So what kind of faith and determination will God’s people need in the last days? Will there be a law that says that he that does not worship the Beast in his image will be killed? Because worshiping the Beast is going to require breaking one of the Ten Commandments. Like Daniel, will God’s people love the Lord so much that they would rather die or go hungry than to break God’s commandments?

The Ten Commandments are not multiple choice questions. Can God’s moral law be amended or repealed? Jesus tells us in Luke 16:21: “And it is easier for heaven to pass away than one speck of the law to fail.” In Psalm 89:34, it reads: “My covenant I will not break, nor alter the thing that is gone out of my lips.”

God is not going to break his covenant, for it’s forever and ever. Also in Psalm 111:7-8 it says that all of his commandments are sure and will stand fast forever and ever. The Ten Commandments just didn’t suddenly appear in Exodus because the Ten Commandment have always reflected God’s nature. We know this from when Potiphar’s wife tried to tempt Joseph to commit adultery in the book of Genesis. Joseph said, “I cannot do that.” Joseph knew this even in the days of Genesis that adultery was a sin.

When Cain killed Abel, God said that sin lies at your door, and sin is the breaking of God’s laws. Was murder a sin in the Garden of Eden? Or was murder not a sin until God wrote it down at Mount Sinai? Just as it is wrong to lie all the way back from the beginning. God simply arranged it, meaning that He wrote approximately 300 words into a stone of granite so it could not be changed nor would there be any misunderstanding that this was his perfect will for all of man and not to just one nation. So when you do away with law, you do away with the nature of God.

All through the Bible, you will find reflected references in His law. God is good, the law is good, God is Holy, the law is Holy, God is righteous, God is truth, God is pure, God is spiritual, God is unchangeable, and God is eternal. These are all characteristics of the law. So we need to be very careful about doing away with God’s law because it is the very nature of God. Jesus was the word that became flesh. Christ said that “he who hears these words of mine is like a wise man who built on a rock.” And the Ten Commandments was written on rock.

If any words would be important, it would be the words that God wrote in stone. Christ was the embodiment of the world. His life was of obedience to the laws of God. He said, “Pick up your cross and follow me.” Jesus came to save us from sin. So what is he saving us from? In 1st John 3:4 it says, “Sin is the transgression of the law.” In Romans 3:20, it reads: “By the law is the knowledge of sin.” We really don’t know what sin is except by the law. For God’s laws reveals what sin is. The purpose of the law is not to save us but to show us that we are in need of salvation.

You can illustrate this by using a mirror to simulate the Ten Commandments and a wash cloth to simulate what Jesus did for us. Let’s say that I walk out among you with something on my face and people begin whispering about it. Then a staff member comes up and says to me, “You have pie on your face.” And if I pulled out a mirror, I could confirm what they have said is true. I could say that the mirror must be broken or say, “You’re right,” and then try to use the mirror by rubbing it on my face to try to remove it or use the cloth of Jesus with the mirror to wipe it away. So you can see that the mirror or the law can show you what’s wrong or the problems in your life. But it could not be removed without the cloth of Jesus. The law is here to show us we need both the law and the blood of Jesus in order to take away sin.

So the law is like a mirror as it says in James 1:23-25. It’s not to take away our sin but to show us our sin, and then you go to Jesus for cleansing.

Paul said where there is no law there’s no transgression. In Romans 7:7 it reads, “I had not known sin, but by the law: for I had not known lust, except the law had said you shall not covet.”
Did Jesus keep the Ten Commandments? In John 15:10 says, “I have kept my Father’s commandments.”

What is the punishment for living a life of sin? In Romans 6:23 it says, “The wages of sin is death.” Some say the Ten Commandments are not binding for the New Testament Christians. Jesus said in Matthew 19:17, “If thou wilt enter into life, keep the commandments.” Also in John 14:15, it says, “If you love me, keep my commandments.”

You may hear a lot of pastors say that you do not have to keep the commandments, saying that Jesus had come to fulfill the law. So what does that mean?

When Jesus came to John the Baptist to be baptized John said to Jesus that you need to baptize me because you are the Messiah. Jesus said to him, “no John, allow it to be this way to allow us to fulfill all righteousness.”

And in Philippians 1:6 it tells us, “He who has begun a good work in you will perform it until the day of Jesus Christ.” 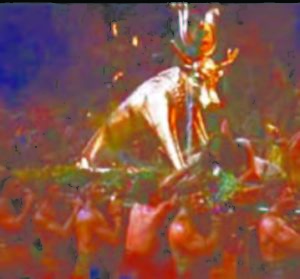 What is the old covenant and why did it fail? Deuteronomy 4:13 says, “And he declared unto you His covenant, which He commanded you to perform, even the Ten Commandments and He wrote them upon two tablets of stone.” But while Moses was retrieving the tablets from God, the Israelites made a golden calf. In Hebrews 8:8 it says, “In finding fault with them he said, ‘I will make a new covenant with the house of Israel and the house of Judah.’”

The old covenant was based on the promises of the people who made a promise. The new covenant is based on the Lord. Hebrews 8:10 says “‘This is the covenant that I will make,’ said the Lord. ‘I will write them into their hearts.’” Who spoke the first law? God did.

The problem is with the people, not the law. God never commanded his people to do something without giving them the power to do so. So when you follow the law that is called obedience. But some churches today are acting as if obedience is legalism. Obedience is not legalism. It is just another way for the devil to intimidate Christians by using dirty words among Christians, like legalist and Pharisee. Doesn’t living under grace, by faith, make keeping God’s laws non-essential?

Romans 6:15 says, “What then, shall we sin because we are not under grace? God forbid!” And again in Romans 3:31 it says, “Do we then make void the law through faith? God forbid yea, we establish the law. Again He use that praise God forbid.”

We’re not saved by our obedience. But if we love the Lord, we want to obey Him. If you go to Billy Graham’s website and ask the question: “Does God expect His people to keep the Ten Commandments?”

Answer: The Ten Commandments are just as valid today as when God gave them to Moses over 3,000 years ago. Jesus said, “I tell you the truth, until heaven and earth disappear, not the smallest letter, not the least stroke of a pen, will by any means disappear from the law.” in Mathew 5:18.

Are some Old Testament laws no longer binding? The answer is yes. The laws contained in ordnances such as yearly Sabbath offerings, meat offerings, drink offerings, etc. such as those in Leviticus 23. The Passover ceremony and circumcision are all ceremonial laws. Just remember this: the Ten Commandments were written by the eternal nature of God. Ceremonial laws were written by Moses.

These are two distinct laws. And the law that was nailed to the cross was ceremonial laws. Not the Ten Commandments. If you’re struggling as we all do, just say, “Lord, I want to do your will.” You know He gave us the Commandments because he wants to save us.
Written in Stone is a free special offer #111. Call 1-877-993-2287 for Amazing Facts.
Formulated by Dunndeal Publications 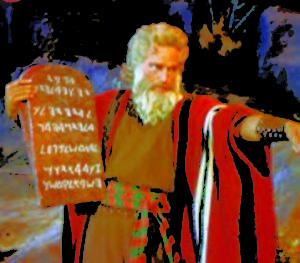