Do you know now many types of owls are in Florida?

We are fortunate to have eight species of owls to look out for in Florida, two of which are rare in the region, but have been sighted and are worth finding. Owls that live in Florida are the eastern screech owl, great horned owl, barred owl, short-eared owl, barn owl, burrowing owl, the northern saw-whet owl (rare) and the snowy owl (very rare).

I have seen owls all over Florida, and they often appear as a wonderful surprise. I went to Cape Coral to explore the burrowing owls and learn about their habitats and the difficulties in keeping these amazing creatures protected. I have seen owls while kayaking on the Hillsborough River and walking at Lettuce Lake Park. I have watched and photographed owls at Fort De Soto Park, Lake Rogers Park, Philippe Park, and many other places.

Here is a good overview on owls from Raeesah Habib (avibirds.com) She writes, “Owls live in a variety of habitats. They are nocturnal raptors, specialized for hunting in the dark, and are equipped with excellent night-vision, hearing, and stealth. Although they are strongly associated with nocturnal behavior, some species are active during the day, while others may hunt diurnally depending on the season. And many owls are crepuscular – meaning they are active at dawn and dusk. Owls are split into two families, the Strigidae, which are the true owls, and the Tytonidae – the barn owls. Spotting owls can be tricky since most species are not active during the day. And owls, by nature, are shy and elusive creatures.”

Here are 5 tips from Raeesah for successful owling

Learn – Find out about the species of owls in the area you are looking.
Listen – Familiarize yourself with the calls of different owls you can come across and listen actively. You are more likely to hear them before seeing them.
Look carefully – Owls have excellent camouflage, and their plumages are adapted to blend into the night.
Signs – Also look out for their pellets which are oblong or spherical and brown or grey in color. A large number of pellets indicates a nearby nesting or roosting owl.
Be respectful – Be still and silent, and refrain from using bright lights, so as not to disturb or frighten them away. 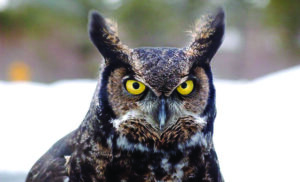 1. Great Horned Owl (Bubo virginianus) The great horned owl is a large raptor named for its sizable tufts and are the most widespread of the true owls, occurring all across North America, extending to parts of Central and South America. These owls need a combination of wooded habitats for nesting and roosting and open areas for hunting. Great horned owls occur year-round in Florida. They do not typically migrate and usually remain in the same territory for life

2. Barred Owl (Strix varia) The barred owl has brown plumage above with cream-white barring and pale below with a 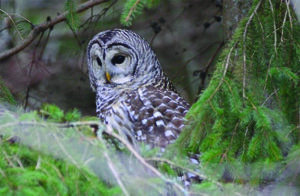 scalloped mantle and brown streaks on the lower breast and belly. The owl has a large, rounded head and a pale facial disk with faint, concentric markings, a large, dark close-set eyes, and a pale yellow bill. The barred owl has feathered legs and yellow feet with black talons.

The barred owls nests in hollow trunks of large trees or snags in deep, wooded areas. The owl is a vocal raptor with a wide repertoire of spectacular, far-reaching calls. The most common call is the series of eight hoots that can be described mnemonically as hu hu hu hoo, hu hu hu huhoo. Other vocalizations may include eerie cackling, grumbling, screeching, and cat-like screams. Barred owls are opportunistic predators that hunt after sunset, typically from a perch, and swoop down to capture small mammals, birds, and amphibians. They also can feed on reptiles, fish, and invertebrates. 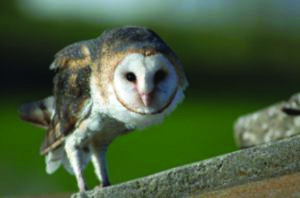 3. Barn Owl (Tyto alba) Barn owls live in open habitats across most of the lower 48 United States but is the least common species in Florida. These include grasslands, deserts, marshes, agricultural fields, strips of forest, woodlots, ranchlands, brushy fields, suburbs, and cities.

They nest in tree cavities, caves, and in buildings (often barns). Unlike most birds, barn owls are thought to use their nesting cavity for roosting year-round.

They usually stand 12-16 inches tall with a largely white, rounded heart or satellite dish-shaped face. They have mottled tan and grey feathers on their back and wings with mostly white feathers across their chest and legs. The call is an eerie shriek, which may have led to many of the folk tales, susperstitions, and urban legends which focus on this species. 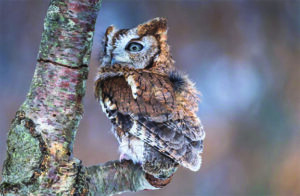 at maturity, these little owls are commonly seen in Florida’s residential areas. The eastern screech owl is a stocky raptor with broad wings, short tail and a patterned plumage with streaked underparts. Two color morphs of this species can be seen, varying from gray to rusty-brown. The owl has a large head with prominent ear-tufts, yellow eyes, and a yellowish bill. The feathered legs have large, powerful feet. 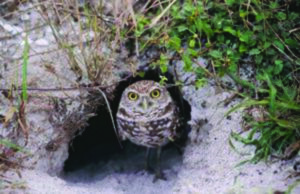 5. Burrowing Owl (Athene cunicularia) The burrowing owl is Florida’s only state-designated Threatened Species of owl. They usually stand 7-10 inches tall and, except in size, are most similar in appearance to a barred owl. The burrowing owl has mottled brown and buff coloration and does not have ear tufts. They have long legs, short tails, and are full of personality. Burrowing owls live in areas with wide-open spaces and little vegetation. They often live in rangeland areas, like cattle pastures. Many also live in urban areas with open field-like habitats like golf courses, recreational sports fields, and vacant lots in residential areas. Unlike most species of owls in Florida, the burrowing owl spends most of its time on the ground or in its burrow.

6. Short-Eared Owl (Asio flammeus) This owl species occurs all across North America, with the majority of the population breeding in the north. They migrate south for the winter when you may get a chance to spot one in Florida. 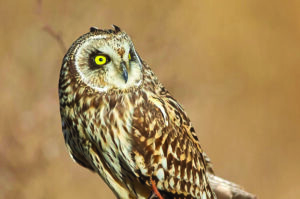 Look out for them in open fields and grasslands around dawn or dusk in winter. They may be on the ground or flying low. They have a floppy, bat-like flight. The common call is a raspy bark, but they are mostly silent during winter. Short-eared owls inhabit large, sparsely vegetated open areas. They nest on the ground, partially concealed amidst low vegetation. Unlike other owls, short-eared owls build their own nests. The female constructs a bowl-shaped nest using grasses, weeds, and feathers. Short-eared owls mostly eat rodents, especially voles, rats, and mice. They also take birds and their nestlings. Populations of short-eared owls appear to be in decline due to habitat loss. 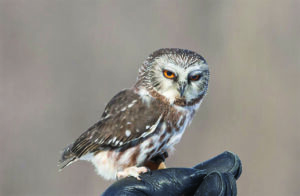 7. Northern Saw-Whet Owl (Rare) (Aegolius acadicus) The northern saw-whet owl is one of the smallest and most adorable owls on the continent. It has a large, round head and a compact body. Its plumage is a rich brown with small white spots on the upperparts and blotchy white streaks below. The facial disc is paler brown, and it has a white Y-shape from the brows to the bill, between its huge yellow eyes.

The short-eared owl is a medium-sized owl of the grasslands. It has a rounded head with small ear tufts for which it is named. Its plumage is mottled brown, buff, and white above and buff below with dark streaks on the breast. The face is white in the center, with a brown facial disc edged with a pale rim. Its piercing yellow eyes are encircled by dark eye patches.

8. Snowy Owl (Very Rare) (Bubo scandiacus) Technically, Florida is not part of their natural range, but snowy owls have 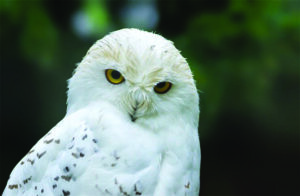 been known to veer as far south as the Sunshine State in some years. With its striking white plumage and bright yellow eyes, the snowy owl is one of the most unmistakable owls in the world. Although mostly white, the plumage is stippled with dark spots on the upper parts. Females are more spotted and have faint brown barring. Snowy owls have relatively small heads, short ear-tufts, and long feathering.

Snowy owls are raptors of the Arctic tundra, where they inhabit open treeless environments. They nest in shallow scrapes on dry ground, often on elevated sites such as ridges, hummocks, hills, and outcrops. Snowy owls are nomadic birds with unpredictable migration patterns. During some winters, they erupt south. Their wintering habitat includes meadows, prairies, grasslands, lakeshores, and coastal habitats.

How can you observe these wonders? Get out and enjoy The Great Florida Outdoors!

Please visit and contribute to the Owl’s Nest Sanctuary in Odessa, Florida. The phone is (813) 598-5926. For more information, go to https://www.owlsnestsanctuaryforwildlife.com.
https://avibirds.com/owls-of-florida/
https://blogs.ifas.ufl.edu/polkco/2019/11/06/commonly-confused-owls-in-florida/