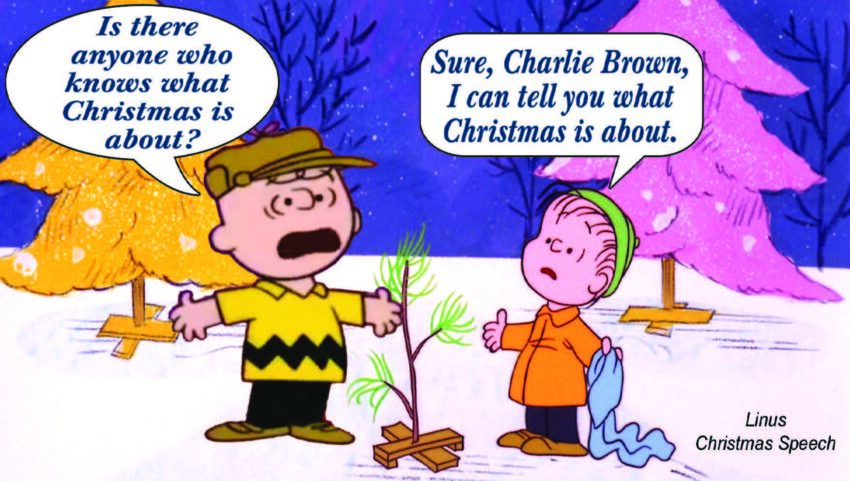 The story begins in a place called Nazareth, in a quiet, sleepy town where most people were farmers and shepherds. In this town was a young Jewish woman Mary. She was very obedient, a God-fearing woman who helped her parents and did her chores. She was kind and helpful to everyone, all the people liked her very much, and soon she was going to be married to Joseph, who was a good, honest, hardworking man.

One day God sent an angel to visit Mary and he said, “Mary, do not be afraid, for God has sent me to you. My name is Gabriel. Because of your kind heart and pure soul, you are of great value to the Lord. You are fortunate. Above everyone else, He has chosen you for a very special task. I have come to tell you that soon you will have a son. He will be a great king and will be loved by everyone.”

Mary was shocked at what Gabriel had to say but remained calm and listened to everything that Gabriel said. Looking up at Gabriel, Mary said, “How is this possible? I’m not yet married.”

“Do not be afraid, Mary. The Holy Spirit of the Lord will come over you, and you will be blessed with the son of God, and you will call Him Immanuel. He will be hailed as the king of Jews, and the savior of mankind.”

“I’m grateful for what the Lord has done for me, and I’m happy to have His wish come through me.”

Afterwards, Mary explained to Joseph what the angel had to say, about God’s wish and the son she was going to have, and because Joseph was a good man, he accepted everything Mary had to say, and made plans to marry.

Meanwhile, in the days to come, King Caesar Augustus issued a decree that a census would be taken because he wanted every citizen throughout the entire Roman kingdom to be counted and documented.

And since Joseph was from Bethlehem, he had to go there to be counted, and Bethlehem was a long way from 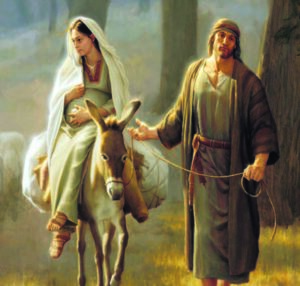 Nazareth. Joseph and Mary had a long, difficult journey ahead that had to be made on foot.

Mary, who was going to be giving birth, sat on a donkey as Joseph walked along. After many days through the desert, Joseph and Mary finally reached Bethlehem. It was getting dark when they reached the town, and they desperately needed a place to rest for the night, but all the inns were full, and no one had a place to spend the night.

Joseph walked all over town knocking on doors looking for a place, but no one had space for them. With Mary about to give birth, it was important she had a safe, comfortable place for the baby and herself.

It was beginning to look hopeless for a while, until Joseph finally found an empty barn built for cows. There was fresh straw there, and Joseph used it to make a bed for Mary and the manger.

Later that night, Mary gave birth and baby Jesus was born! Joseph then made a small bed from the fresh straw and wrapped the baby in swaddling cloths and placed Him in the manger. Mary was happy that the prediction of the angel had come true, that Jesus Christ was born. 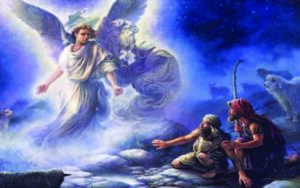 That same night in the same country, some shepherds were watching over their flock on a hill. Suddenly they saw a bright light in the sky and in front of them was a beautiful angel.

Amazed, not knowing how to react, they listened as the angel spoke to them saying, “Don’t be afraid. I come to give you good news. In the town of Bethlehem, a savior has been born, and His name is Jesus. Everyone will know of this news, so go in peace and spread the good news that a savior has come.” Overjoyed, they ran towards Bethlehem to find baby Jesus, King of the Jews.

On the night Jesus was born, three wise men were traveling on their camels across the desert and suddenly a bright light came down on them and they looked up at the sky and they saw a bright star. It was a kind of a star they have never seen before. They were aware of the prophecy of Jesus coming and when they saw it, they knew it meant that the King of the Jews was born. During this time, the country was ruled under King Herod, a selfish evil king, and when the three wise men informed the king about the star and what it meant, the king began to worry that he may lose his kingdom to this baby boy.

Herod said, “Go and find this King of the Jews, Jesus, and let me know where he is so I can also worship him.” But he was plotting to kill the child. As the three wise men followed the star for several days, they found baby Jesus in a barn in the manger and were surprised to find the future King of the Jews lying in a manger where the star had led them. 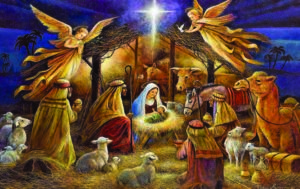 They bowed down to baby Jesus with valuable gifts—gold, frankincense, and myrrh. It was highly unusual for anyone to give these precious things to a newborn baby.

For these types of gifts were only given to kings. But the wise men knew that this was no ordinary baby, and the wise men fully understood the purpose of Jesus Christ’s birth. Now you know what Christmas is about. Amen!