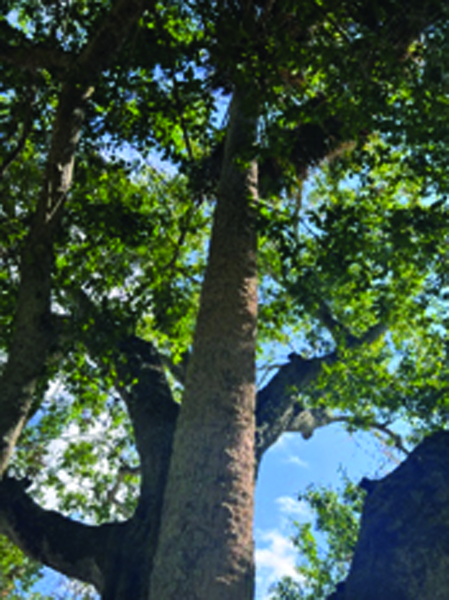 “In every walk with nature, one receives far more than he seeks.” John Muir 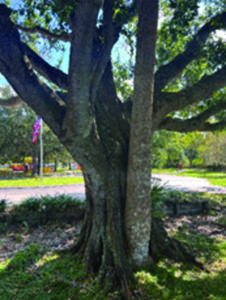 We took the grandkids to RE Olds Park in Oldsmar and looked around. Once we left the car, I noted two trees, a palm and an oak, that were growing together. The palm was almost surrounded by the oak. “That’s amazing,” I said. “I wonder how that happens? Two different trees, but they grow together.” I was hoping for a response from the kids, but they shot over to the playground before I finished talking.

A bit of history first. The park was named after Ransom E. Olds, the founder of Oldsmobile and REO cars. R.E. Olds purchased 37,541 acres of land on the northern shores of Tampa Bay in 1913 and named the area “R.E. Olds-on-the-Bay”. In 1937 the area became known as Oldsmar, when the town’s name was officially changed.

I found an article about, “The Love Trees of St. Augustine, Florida.” The headline included, “Intertwined, interspecies trees which locals believe can grant boons to lovers” are two separate species of tree that grow in, on, or through one another.

It read, “According to local tradition, if two lovers kiss beneath one of the rare, yet unmistakable arbors they will share an everlasting romance. While botanists from around the world have neither tried to, nor been able to verify this effect, many couples who have shared an intimate moment beneath the variegated branches still return on their anniversary to renew the romantic spell.”

Nicknamed the “love trees,” these botanical soulmates have grown from an organic, natural foundation. Valerie Trouet, an Associate Professor of Dendrochronology at the University of Arizona, and author of Tree Story: A History of the World Written in Rings, says that the most common union is between an oak and a palm tree. The seeds of palms “fall in between the crevices of these horizontal branches of oak trees and start growing,” she says. The palm and oak tree bond has been watered by the humid climate in Florida. According to Ripley.com, Trouet explains that “in Florida’s moist climate, some palms can soak up enough moisture within the bark of another tree to grow from it; no soil required! The differing root systems of these trees aids in the process. Palms have very shallow roots, so they take water from close to the surface, whereas oak trees are the other way around. They have deep roots that stabilize that hefty trunk,” Trouet says.

The “Love Tree Café and Boutique” in St. Augustine, owned by Margaret and Frankie Espinal, is home to the Historic District’s most famous love tree. “The legend of the love tree is that two lovers each planted their own tree,” says Margaret, “one was a palm and one was an oak. Eventually, the two trees fused together. You will see the palm tree growing directly through the oak tree.”

I now pronounce this the Love Tree of Oldsmar. Let me know if the folklore from St. Augustine holds true in Tampa Bay. I have seen this phenomenon many times before in nature, especially on the Hillsborough River. If you keep an open eye, you will see many examples.

You many also see nurse logs, another creation that is quite common in nature. A nurse log is a fallen tree which, as it 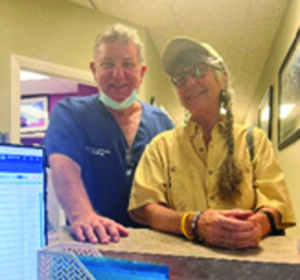 decays, facilitates growth and support to other plant seedlings. A pleasant breeze swept over the park on this sunny October day. A group of white ibis, a great blue heron, and a little blue heron perused the shoreline looking for lunch. A couple of high energy squirrels chased each other around the trunk of a nearby oak tree. Kids were romping on the playgrounds, with parents and guardians keeping an eye on the activities. A circle of tall bamboos trees reached for the sky, and children played along the base of the trees.

Where can you find this wonderful park and the amazing creations like love trees?

Thanks to Ripley.com and atlasobscura.com Get out and enjoy The Great Florida Outdoors!