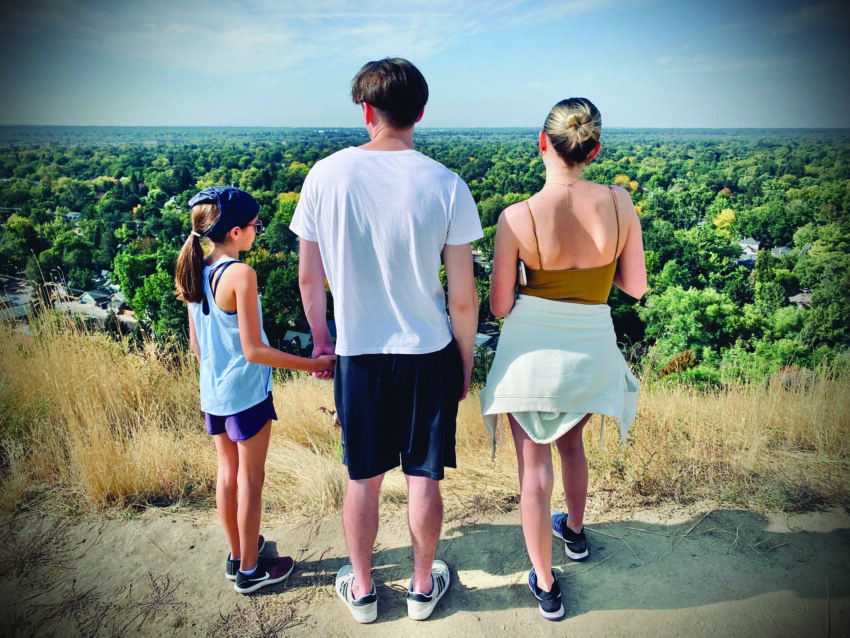 Hi! I’m Harley, the monthly column writer of the Kids Korner articles. This month’s article is about Idaho, a U.S. state in the Pacific Northwest.

About a month ago, my family traveled to Boise, Idaho to surprise my grown-up brother for his birthday. We stayed there for a week and did many activities such as hiking, visiting two museums, driving a four-hour loop to five small towns (including three that we soon discovered did not exist, including Grimes Pass), and enjoying the warm, breezy – not humid – weather. The food was amazing!

We hiked at Camel’s Back Park, and the steep trek up the yellow hill was exciting and difficult, but SO worth it for the spectacular views at the top. Boise is called “The City of Trees”, and there were so many green trees at the bottom, mixed with some red and yellow. Our hike at Military Reserve with my brother’s friends occurred later in the week, and it was long with lots of switchbacks. But the views of downtown were cool.

We drove to the Idaho State Museum in the middle of the week. There was so much information I thought my head would burst, and the entire hands-on games FLOOR was awesome! It talked about the history of Idaho and the five Native American tribes of Idaho. It was huge and cool.

On Monday we hopped in the car with my brother and started to drive to our first destination, Robie Creek. We lost GPS and internet for almost the entire drive, so we had to remember where to drive. We drove up a mountain for thirty minutes but didn’t see anything except for a few houses. We drove down, and a FedEx man told us that Robie Creek was only a community.

So we continued to our next town, which was supposed to be the largest. And it was. Idaho City was huge and amazing. In fact, can you believe it was actually the largest city in the Pacific Northwest in 1862? I could have spent a day there easily at the restaurants, historical sites, and the hot springs. We didn’t make it to the hot springs that day, though. Lunch at Trudy’s Kitchen was delicious, and then we resumed our journey.

Lowman was a small town in the middle of nowhere, with a few log cabins and a tall Indian teepee, Horseshoe Bend was a pleasant city, with views of the Boise River and nice shops, and then we proceeded to Eagle. Eagle was an exciting town with a high-quality consignment shop and a spectacular LEGO store. Finally, we headed back to Boise.

As you can see, things require patience and endurance. If you don’t hike, for example, you won’t see the mountain top or the view. If you don’t drive, you’ll never reach your destination. If you put in the effort, you’ll have what you wanted eventually. Goodbye! We’ll be back next month!

Harley Isabel Smith is a 4th grader who has been featured on TV as a philanthropist, has a heart for evangelism, and writes monthly for the Gazette’s Kid’s Corner. Visit https://harleyisabelsmith.com where she is constantly adding written and video content to entertain and educate children.

Matthew 19:14 Jesus said, “Let the little children come to me and do not hinder them, for the kingdom of heaven belongs to such as these.”