What’s in a name?

The English word “wort” means “small plant,” expressed in names such as Pennywort and Bladderwort.

The term liverwort originated from the fact that the early herbalists thought that one of the liverworts had some resemblance to a liver and was therefore might be useful as a medicine for liver ailments. Liverwort derives from a “liver-like small plant”.

Liverworts represent a branch of non-vascular plants, most of which are terrestrial. 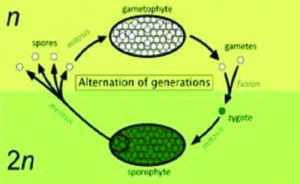 Liverworts, like most plants, display an alternation of generations between a haploid organism and a diploid organism.

In alternation of generations, a single species displays multiple forms. There is the sporophyte, which is capable of producing haploid spores. These spores cannot fuse together like gametes, and instead they grow into a new organism, the gametophyte. The gametophyte is still haploid, but grows into a multicellular organism. The gametophyte can produce gametes, which are similar to spores except they will not grow into a new organism directly. Instead, gametes undergo fusion or fertilization, and form a new cell, the zygote.

The zygote, now a diploid organism, grows to be multicellular. It develops special organs capable of meiosis, a type of cell division which reduces the amount of DNA. Through this process, the spores produced are haploid, again. This means that they carry only 1 copy of DNA.

They are released into the environment, and the process can start over. Sporophytes and gametophytes 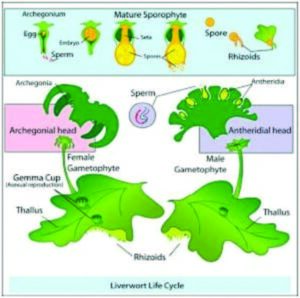 typically look and form differently, although this is not always the case. In the case of liverworts, the sporophyte and gametophyte versions are very different. Look at the image below.

In liverworts, the gametophyte is the dominant life cycle. This means that liverworts are typically haploid organisms. In the image above, you will see two gametophytes. Liverworts are also dioicous, meaning they have haploid gametophytes with separate sexes. The male plants produce an antheridial head, capable of producing sperm. The female archegonial head produces an egg. The sperm are dispersed from the male gametophytes and are carried by wind or water to the egg found on another plant.

When the sperm fertilizes the egg, an embryo is formed. This is the sporophyte, and in liverworts it will not get very big. The liverwort sporophyte develops into the microscopic seta. The seta, or mature sporophyte, is completely dependent on the gametophyte for food and survival, and lives within the archegonium its entire life. The seta is responsible for conducting meiosis, and creating the haploid spores. The spores will be released into the environment, and will grow into adult gametophytes. The image shows the development of the first rhizoids on the spore, which will become a rudimentary root system for the grown gametophyte.

However, this is not the only way liverworts can reproduce. Take a look at the image again. You will notice that the gametophytes both have small cups, called gemma cups. These cups contain small clusters of cells known as gemmae. When rain or water spashes into the cup, the gemmae are dispersed from the plant, and are capable of growing into full gametophytes in the right conditions. While liverwortshave the ability to reproduce through the above mentioned process of alternation of generations, this much simpler process of asexual reproduction probably accounts for a large percentage of the plant’s reproduction and dispersal.

In broad terms, a liverwort gametophyte will show one of two forms, depending on the genus. In a leafy liverwort the gametophyte consists of leaves on stems. In a thallose liverwort you’ll see a flattish, green sheet – possibly wrinkled or lobed. Such a sheet is called a thallus and, in many cases, that’s all there is to the gametophtyte. 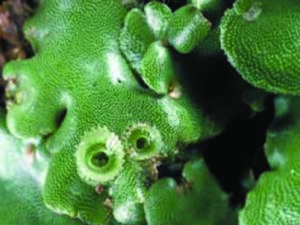 The atmosphere was composed heavily of carbon dioxide and contained little oxygen. As plants like ancient liverworts began to emerge, they consumed the carbon dioxide and released oxygen. This drastic changing of global chemistry would later lead to climate change and massive extinction events. Unlike liverwort, vascular plants had a distinct advantage in transporting and holding water. However, in the 485 million years since the emergence of land plants, both types have colonized nearly every terrestrial space. Liverworts and other non-vascular plants can be found in deserts, and in cold northern latitudes as well.

Think about the role of liverworts in climate change! Many researchers and citizen scientists have been called upon to study liverworts and help quantify climate change. These plants could become our climate “canary in the coal mine.”

Liverworts, once thought to be firmly related to the ferns, have more recently been given their own subdivision. The ferns show an opposing alternation of generations. Unlike liverworts, they show a dominate sporophyte. It is now thought that ferns are more closely related to gymnosperms (conifers) and flowering plants. Liverworts, therefore, represent an ancient and mostly unchanged division of some of the first terrestrial organisms to ever come out of the water. The argument of whether to include the liverworts within the Bryophyte (moss) grouping is an ongoing debate, but recent classifications have kept them in their own division.

Thank you to BiologyDictionary.net

Where do you find liverworts and other fine creations?

Get out and enjoy The Great Florida Outdoors!