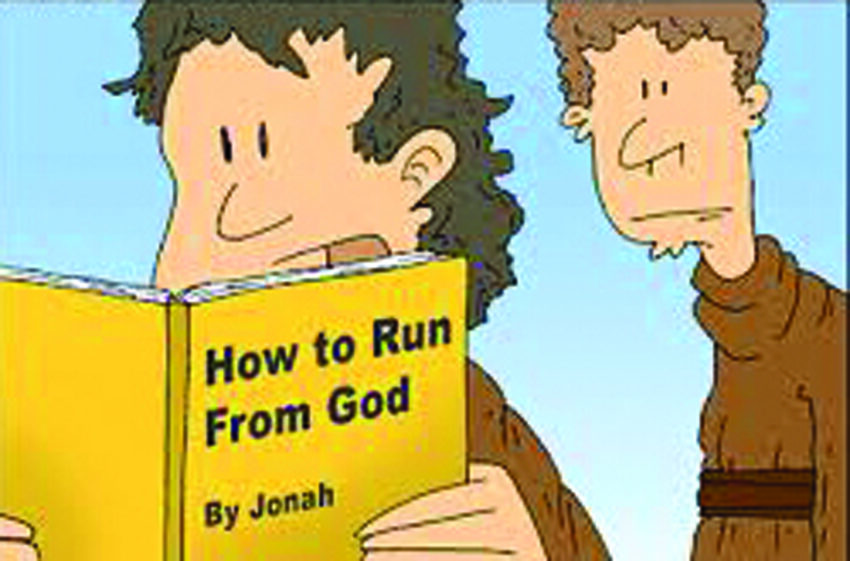 Jonah was a wise old man who lived in Israel long, long ago. He was loved and respected by the people. Everybody came to him to solve their problems, and he gave them wise advice. God loved him because he was a good man, and he helped his fellow beings. Jonah loved God. He followed his teachings and prayed to God all the time.

Nineveh was a neighboring country of Israel. The people in this country were known to be very evil. They did not follow God. They did bad things. They were cruel, greedy, and were always fighting with other people. Because of this, God was angry with the people of Nineveh. One day, God spoke to Jonah and called for his service.
“Jonah, I have something to tell you.”

“My Lord, I am lucky to be of your service. Tell me, I am listening to you, God.”
“There is a place called Nineveh not very far from here. The people living in this place are evil. They steal from each other, kill their own brothers, and do a lot of other evil things. Their king is lazy and selfish, he eats drinks and enjoys himself while his people are starving. He does not care about his people. Their actions anger Me, and I have decided to destroy them.”

“I understand, my God. I am well aware of their actions. They are a wretched group of people. They are also our sworn enemies.”

“In 40 days, I will destroy the land of Nineveh and everyone living there. This is my decision.”

“So be it, my Lord. You have told me all of this. But I still do not understand how I can be of service to you. Tell me my Lord, what should I do to make your wish come true?”

“You are a good righteous man, Jonah. You have always obeyed me and followed my teaching. I trust you and your abilities. Therefore, you must go to Nineveh immediately and talk to the people about me. They do not know me. You must speak about my love. You must tell them to change their ways and become good people. Only you can do this.”

“But God? How will I do this? They are evil. They will not listen to me. Also, they are our sworn enemies. The people of Nineveh are constantly attacking us, and waging war against us. They try to steal from us and harm our women.”

“That is all true. But still, you must go and talk to them. They will have a second chance through you. If they fail, they will be destroyed. You are their only hope for survival now. Only you can convince them to change their ways, and turn to me, the one and only living God. I have complete faith in you.”

“God, you have decided to destroy them anyway after 40 days. Then why should I go there and risk my life? My countrymen will be more than happy to hear that Nineveh is going to be destroyed. They will abandon me if they hear that I tried to stop that from happening!”

“This is my will. You must do this, Jonah. You must leave for Nineveh immediately!”

Jonah was very troubled by what God had asked of him. He was happy that God had decided to destroy the people of Nineveh. They were the enemies of Israel. He did not believe that he could change their ways. But then, how could he disobey God? Jonah finally decided he would not go to Nineveh. He got scared and decided to escape from Nineveh and hide from God. Jonah traveled far from Nineveh over the deserts and barren lands. 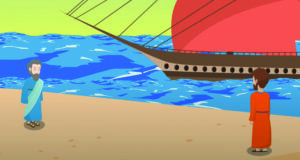 Finally, he reached the seashore where he saw a ship heading to another city across the sea. He asked the captain whether he could get on the ship. The captain was not happy at first but finally agreed. The sailors did not know about the one true God that Jonah served and believed in. They worshipped stone and wood and idols. They had a god for the sun, another god for the moon, another for the ocean, and so on. Jonah saw this but he did not speak anything. He went and slept in the lower part of the ship. Jonah was fast asleep in the lower part of the ship. Once the ship had tracked a short distance, the ship got caught in a great storm! They were tossed around in the water like a paper boat. Everybody on the ship was very scared and began to cry out loud to their gods. The men on the ship were surprised to see Jonah sleeping peacefully while a great storm was raging outside.
“Hey Jonah, wake up… Wake up! How can you sleep like this?”

“There is a storm outside, and the ship is going to be torn apart! Wake up and preach your God!! We have been praying to our gods for some time now, but the storm is continuing to rock the boat.”

“No, this is the work of my God, the one and only true God who made the whole world.” 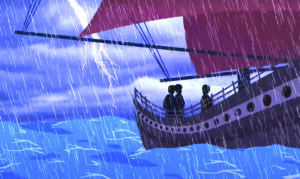 “Did you do anything to make him angry? How could we stop this storm?”
“I tried to hide away from him. He gave me a task, but I refused to do it. That is why he’s angry at me.”

“Now what should we do?”

“There is nothing else to do. You have no other option but to throw me off the ship. And then the storm will go away. My God will leave you alone.”

“No, we cannot do that. You are a good man. We don’t want to harm you. Let us try to throw some of the cargo out and see if we can keep the ship afloat.”

The sailors started throwing out the packages loaded on the ship, one by one, but the storm did not go away. There was no use in doing this.

“Throw me into the water! Save yourself! I hope your God keeps you safe.”

When the sailors realized that they had no other option, they threw Jonah off the ship into the sea, and like a miracle the storm subsided. The sea became calm, and all of a sudden at that moment a big whale came up and swallowed Jonah.

Jonah was scared like never before. He was in the dark, and cold. There was a horrible smell around him. Also, it was slimy, and all kinds of things were floating around him. It was then that he realized that he was inside a whale!! Jonah could not believe this was happening to him but realized that God was doing all of this.

Jonah spent three days and three nights in the belly of the whale. He prayed the whole time to God. He was asking for forgiveness and promised that he would never try to hide away from God. Jonah would lose hope from time to time and thought he would never see daylight again. He thought about the foolish things he had done. How could he believe that he could disobey God and hide from him! This was so stupid of him! Alone in the cold dark insides of the whale, Jonah became very sad, but he called out to God, and it gave him strength. He believed that God would keep him safe.

On the fourth day, the whale opened its mouth and spit Jonah onto the beach. Jonah was relieved to see the light of day. He had been inside the dark belly of a whale for three days! Then God spoke to him.
“Jonah, you cannot hide from me. Whatever you do, I’m with you all the time.”
“I am so sorry, my Lord. I realize now how foolish I have been. Tell me what I can do to make up for this?”

“Do as I tell you. You must go to Nineveh and complete the task I gave you. They are evil because they do not know me. They have not heard of my teachings. They deserve a chance to change their ways and become good.”
“I will do whatever you ask of me my Lord. I shall go and speak to the people of Nineveh about your undying love!”

This time, Jonah went to Nineveh as promised. He talked to the people about God and his kingdom. He talked about what had happened to him and how God had rescued him from the raging storm by sending a whale. He showed them why it was important to do good things and be kind to people. 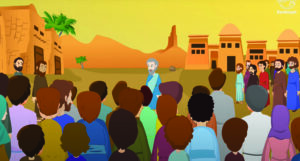 He taught them God’s teachings and how God was protecting them and taking care of them at all times. He also warned them about God’s punishment. To his surprise, the people of Nineveh listened to him! The king heard of Jonah and called him to the palace. Jonah talked to the king about how God was merciful, but that if he didn’t change himself then the city of Nineveh would be destroyed in 40 days.

The king asked for forgiveness for all the bad and horrible things he had done and promised that he would pray to the one and only true God from now on. He also announced throughout the land that everybody should pray to the almighty God that Jonah served. Jonah spent many days with the people of Nineveh. God saw that indeed the people of Nineveh had changed. So, God decided not to punish the city of Nineveh. Later, Jonah realized his work was finished and he started on his journey back to Israel.

However, he was still hoping that Nineveh would be destroyed as he did not completely believe that their people could actually become good. So, when God decided not to destroy the city, Jonah was not happy. God realized what he was thinking and spoke to Jonah.

“Jonah, why are you unhappy?”

“You had said that you would destroy the land of Nineveh. These people are enemies of Israel! Why didn’t you destroy them?”

“Jonah, you don’t understand the good you have done. These people are no longer your enemies. They believe in the one true God, just like you do. I believe that everybody needs a second chance to correct their mistakes. I do not want to punish my people. I love them, I created them! So, if they make use of the opportunity to become good, then why should I destroy them? All of this has been possible through your work Jonah! Go home now, return in peace. You have completed God’s work!
“Very well, my God. I understand now. Thank you for this chance to serve you, my Lord! Thank you for saving me so many times.”

Jonah then made the journey back to Israel and continued to speak about God and the love for his people. He told everybody the story of how he was trapped inside a whale for three days and how God saved him. The people loved and respected Him, and the old prophet lived for a very long time.

Are we lost or has God found Us?