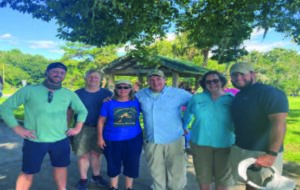 During the recent filming for a new part of our film Reading the Florida Landscape (based on my book of the same name), we took a boat trip on the Ocklawaha River to explore Rodman Dam with Captain Erika and Margaret Spontak. Both women are actively involved with the dam being re-opened and the water restored to its pristine and wonderful boundless flow.

In the words of Carl Buchheister, former president of the Audubon Society, the ill-fated Cross Florida Barge Canal project would have been “One of the greatest boondoggles ever perpetrated.” The 1935 plan proposed by the federal government called for the creation of Florida’s version of the Panama Canal. A series of dredging and infrastructure projects would bisect the state, creating a continuous, navigable waterway from the Atlantic Coast to the Gulf of Mexico.

But before the Cross Florida Barge Canal project was abandoned, profound 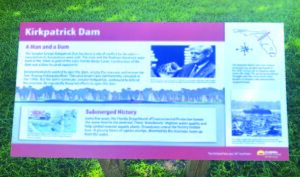 I stood on the controversial Rodman/Kirkpatrick Dam, completed in 1968 as part of the Cross Florida Barge Canal. Though that project was never completed according to plan, this dam still stands today. The impounded waters had the effect of flooding about 7,500 acres of forested wetlands, over 20 spring heads and 16 miles of the Ocklahawa River. 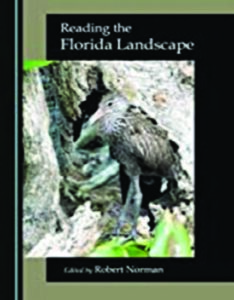 “The 7,200-foot-long earthen dam has a four-gate spillway designed to discharge up to 36,000 cubic feet per second of water from the Rodman Reservoir, which is located on the upstream side of the dam and spillway. The approximately 9,500-acre reservoir has a drainage basin of almost 2,800 square miles, and its headwaters start in the Green Swamp and Lake Apopka.

For more than 14,000 years, Florida’s natives and newcomers set out on the St. Johns, Ocklawaha, and Silver Rivers in search of connection with nature, their fellow man, and a network of waterways that linked the state’s wild roots to its growing communities. 50 years ago, all of that changed.

Few can recall The Great Florida Riverway in its free-flowing glory. Before the Rodman/Kirkpatrick Dam was completed in 1968, the Ocklawaha River, the heart of The Great Florida Riverway, nurtured an expansive cypress forest, crystal-blue springs, vibrant fish migrations, and thriving wildlife. These wonders live on in photos and stories but remain just beyond the reach of our collective memory.

The Ocklawaha’s current state does not need to be its fate. Now is the time to breach the dam and reconnect the Ocklawaha to Silver Springs and the St. Johns River, restoring a 217-mile network representing some of Florida’s most critical water resources and wildlife habitats. Together, we can restore the ecological and economic health of the river and its communities from Lake Apopka to the Atlantic Ocean.

The indelible footprint of human development in Florida can be read in the macro and the minutia. We must fight to battle these ongoing threats that continue to plague Florida’s amazing yet imperiled freshwater ecosystems.

If the dam is reopened, it may be that the headwaters of the Silver River will be home to the biggest group of manatees in the USA, and the marine life will once again be able to migrate back and forth on the dynamic rivers.

How do you see and learn about what is happening in nature?

Get out and enjoy The Great Florida Outdoors