On a beautiful May morning hike to May’s Prairie at Chinsegut, I looked upward and saw the smooth gliding movement of a swallow-tailed kite. I pointed the bird out to my three friends with me and we relaxed and followed the bird as it joined its mate. These graceful birds skimmed the treetops and gently shifted their motion to soar up high, framed by clouds and sun.

The lilting Swallow-tailed Kite has been called “the coolest bird on the planet.” With its deeply forked tail and bold black-and-white plumage, it is unmistakable in the summer skies above the swamps of the Southeast. Flying with barely a wingbeat and maneuvering with twists of its incredible tail, it chases dragonflies or plucks frogs, lizards, snakes, and nestling birds from tree branches. After rearing its young in a treetop nest, the kite migrates to wintering grounds in South America. (TheCornellLab)

The Swallow-tailed Kite is unmistakable in flight, with its long, pointed wings, deeply forked tail, and contrasting black-and-white plumage. This largest of American kites is a graceful, buoyant flier, so lightweight and maneuverable that it can capture a dragonfly midair or pluck a lizard from its treetop hideout—all without a single wing beat.

In flight, it frequently turns its tail, sometimes to nearly 90 degrees, using it as a rudder to maintain its flight path, veer sharply, or circle.

The Swallow-tailed Kite is unusually gregarious for a raptor. Pairs commonly nest in close proximity, and outside the breeding season, communal night and pre-migratory roosts may attract hundreds of kites. These birds also migrate in large groups that sometimes number in the thousands.

Easy to see overhead in areas where it nests, the Swallow-tailed Kite has gathered many names, including “Forked-tailed Kite” or “Swallow Hawk,” nods to its unique appearance and flight style. In the 18th century, the English naturalist and illustrator Mark Catesby originally christened it Accipiter cauda furcata (forked-tail hawk). Other nicknames, such as “Wasp Hawk” or “Snake Hawk,” describe the bird’s diet of insects and small reptiles.

Two Swallow-tailed Kite subspecies are recognized. The population that nests in the United States breeds from coastal South Carolina to Florida and west to Louisiana and eastern Texas. These U.S. birds winter in South America. The other subspecies, comprising the majority of the world’s Swallow-tailed Kites, is resident in Central and South America.

From its bill to the tips of its forked tail, the Swallow-tailed Kite measures almost two feet long, with a wingspan of over four feet. Its white body and black wings and distinctive tail make it easy to identify. This bird is usually seen in flight, often high over the trees, and is not often heard. One of its calls is a high-pitched, whistled klee-klee-klee.

Swallow-tailed Kites primarily eat flying insects such as dragonflies and cicadas, which they capture and consume on the wing. But these predatory acrobats don’t limit themselves to invertebrates: As they cruise the treetops, they also snag snakes, lizards, treefrogs, and even small bird nestlings and eggs. In South Florida, where Swallow-tailed Kites sometimes nest in suburbs, their diet includes hatchlings of the introduced and thriving Green Iguana. Unusual for raptors, Swallow-tailed Kites will eat fruit, especially on their wintering grounds. They even drink on the wing, skimming the water’s surface to collect water, as do swallows.

During courtship, Swallow-tailed Kites spend a lot of time diving, chasing, and vocalizing. When ready to nest, they build a shallow cup of twigs lined with Spanish moss or other soft vegetation. Pairs build their nests high in the crowns of tall trees such as pine, bald cypress, or cottonwood. In addition to towering trees, successful nesting requires nearby open areas where the birds find prey.

From hatching to fledging, young Swallow-tailed Kites spend up to six weeks in the nest. Not all reach maturity, however. As in other species ranging from the Great Egret to the Great Horned Owl, the first kite chick sometimes kills its younger, smaller sibling. Known as obligate siblicide, this seemingly cruel phenomenon reflects the breeding conditions of a particular year—if there is enough food, more chicks survive.

The Swallow-tailed Kite was once found all along the Mississippi River, as far north as Minnesota. Decades of widespread forest clearance and shooting took a heavy toll. The species once nested in 16 states but now breeds in only seven, with much of the population in Florida. Today, habitat loss remains the main threat to this species. In its U.S. range, large areas of humid bottomland forest have fallen to unsustainable logging and development. Although the U.S. population seems to be increasing due to reforestation in riparian areas, the trend may not last long, as these habitats are threatened anew by development. (American Bird Conservancy)

Remember that the Swallow-tailed Kite leaves the U.S. after the breeding season, so summer is the time to look for them. Located six miles north of Brooksville, the Chinsegut Conservation Center Tract covers 408 of the 850-acre Chinsegut Wildlife and Environmental Area (WEA). Where can you find an acrobatic marvel of the sky—the Swallow-tailed Kite?

Get out into The Great Florida Outdoors! 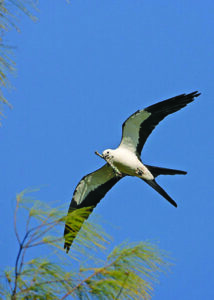