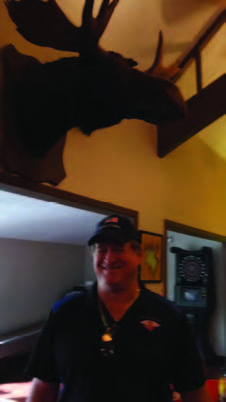 Moose Lodge Lakeland #2295, Legacy Vets MC J Chapter in Zephyrhills, and VFW 2297 hosted a post New Year’s luncheon for Liberty Manor for Veterans January 2, 2021. All four organizations were responsible for organizing donations for the veterans throughout the holidays.

You may have heard the saying, “A burden heavy to one is borne lightly by many.” This is at the core of the Moose organization and what makes us unique in our Lodges, local communities, and charitable cities that we support. Our roots can be traced to 1888 and the founder of the Moose, Dr. Henry Wilson, who successfully established the first Lodge in Louisville, Kentucky. In the early years, the Moose was to serve a modest goal of offering men an opportunity to gather socially, to care for one another’s needs and celebrate life together.

Since those early years, our fraternal organization rapidly expanded to include valuable service to our communities, care for children and teens in need at Mooseheart Child City & School, a 1,000-acre campus, located 40 miles west of Chicago, and care for our senior members at Moosehaven, a 70-acre retirement community near Jacksonville, Florida.

With a combined membership of over 1,000,000 members in the Loyal Order of Moose and Women of the Moose, our presence is felt in over 1,500 communities across all 50 states and four Canadian provinces, plus Great Britain. The Moose organization contributes between $75 to $100 million worth of community service (counting monetary donations, volunteer hours worked and miles driven) annually.

In addition to Mooseheart and Moosehaven, the Moose fraternity’s Heart of the Community effort is multifaceted with internally developed programs like Tommy Moose. Tommy Moose aids in helping children overcome fears and anxiety during times of stress. Donated to law enforcement, fire fighters and other emergency workers, Tommy Moose plush dolls are presented to children in various traumatic situations. The external focus of our service is directed towards many worthwhile national charities, a few of which are: Salvation Army, Safe Surfin’USA Foundation, Big Brothers-Big Sisters, and St. Jude.

In our local Lodges, you will find a wide array of activities to participate in both as an individual and as a family. From holiday parties, dances, sports, themed dinners and live entertainment, the Moose has much to offer. Membership can mean different things to different people. You are the one determining what you want to get out of the organization, and what you want to give back.

The Moose is about celebrating life together, serving those in need within our local community, supporting our children at Mooseheart and standing by our senior members at Moosehaven.

The primary mission of Legacy Vets MC USA is to do whatever is necessary to bring our POW/MIA Brothers home from all wars and to insist on full accountability from our elected officials. As advocates, we participate in motorcycle & community activities to draw public attention to the unique problems of all veterans, especially the Vietnam veterans. As activists, we organize motorcycle events within our communities, which help all veterans that are unable to help themselves.

The mission of the Veteran of Foreign Wars, The Veterans of Foreign Wars of the United States is a nonprofit veterans service organization comprised of eligible veterans and military service members from the active, guard and reserve forces. Roots go back to 1899 when veterans of the Spanish-American War (1898) and the Philippine Insurrection (1899-1902) founded local organizations to secure rights and benefits for their service. Many arrived home wounded or sick. There was no medical care or veterans’ pension for them, and they were left to care for themselves. In their misery, some of these veterans banded together and formed organizations that would eventually band together and become known as the Veterans of Foreign Wars of the United States. After chapters were formed in Ohio, Colorado, and Pennsylvania, the movement quickly gained momentum. Today, membership stands at more than 1.5 million members of the VFW and its Auxiliary. VFW voice was instrumental in establishing the Veterans Administration, development of the national cemetery system, in the fight for compensation for Vietnam vets exposed to Agent Orange, and for veterans diagnosed with Gulf War Syndrome. In 2008, we won a long-fought victory with the passing of a GI Bill for the 21st Century, giving expanded educational benefits to America’s active duty service members and members of the guard and reserves fighting in Iraq and Afghanistan.

We were the driving force behind the Veterans Access and Accountability Act of 2014 and continually fight for improved VA medical centers services for women veterans. Besides helping fund the creation of the Vietnam, Korean War, World War II, and Women in Military Service memorials, in 2005 the VFW became the first veterans’ organization to contribute to building the new Disabled Veterans for Life Memorial, which opened in November 2010. And in 2015, we became the first supporter of the National Desert Storm War Memorial which is planned for construction at our nation’s capital. VFW has many programs and services that work to support veterans, service members, and their families, as well as communities worldwide.

The mission of Liberty Manor for Veterans; Inc. is to promote the developmental and social needs of disabled and honorably discharged veterans who have fallen victim to homelessness providing transitional; supported housing and establishing objectives designed to attribute to self-sufficiency. Anyone interested in assisting this meritorious initiative, please contact Connie Lindsay (813) 900-9422 or Liberty Manor for Veterans (a 501c3 non profit organization) website at http://www.libertymanor.org. 10015 N 9th Street Tampa, FL 33612 or the mailing address P.O. Box 274081 Tampa, FL 33688-4081. Our veterans are certainly worthy of our help. EIN #02-0775720.