Hi! 👋 My name is Harley 👧🏽 and today 🗓 we are going to talk about the first Thanksgiving. 🧕🏼🌳 🦌 First let’s time travel 🧳 to when the Pilgrims were in England. Life was good. But there was one☝️ problem. Can you guess what it was? We weren’t allowed to worship 🙏 God properly. So we got on the Mayflower. 🚢 It took us sixty-six days to get to America, and a lot of people died on the boat and in the winter. 🥶 Only half of the people lived until spring. 🌸 🌱

We had some conflict with the Native Americans (Indians), but we eventually got along, and made a peace ✌️ treaty that lasted a long time. We had a different language 🗣 than the Indians, but Squanto ( did you know his real name was Squantum?) came, who knew English and Indian, so he interpreted. But we still were ruled 👑 by England 🏴󠁧󠁢󠁥󠁮󠁧󠁿 and we wanted freedom so we fought the Revolutionary War ⚔️ and won. We got total freedom on July 4th, 1776. My birthday is on July 5th, 2012! 🎂

We were grateful to live freely as Americans. Back to Pilgrims… repairing time machine… OK! In November 🍁 1621, we gave a feast with the Indians because we were grateful for all our blessings. You see, 👀 Thanksgiving isn’t about the food and games. It’s about being grateful for what we take for granted. A list of things would look like,

KIDS 🧒🏽: Friends, family, toys, school, and other things you never think about, like, shelter and food. Even if you don’t like your beans or asparagus, don’t complain. Kids who live in poor countries would beg for scraps of yucky things.

ADULTS 🧑🏽: Be grateful for your kids, even if they annoy you. They are blessings. And don’t buy a million Bibles and tuck them in a dark corner. The Bible is God’s Word, and you need to read it every day. My daddy is reading me the Old Testament every morning at breakfast, and we are in the book of Numbers. Not 123. The book of the Bible. So Thanksgiving isn’t just about turkeys. 🦃 We don’t even know if the Pilgrims had any on the original feast.

Work, time machine… OK! Back to the 399th Thanksgiving, AKA 2020. That’s it! Wait… if April showers bring May flowers, than what do May flowers bring? PILGRIMS! And good-bye! 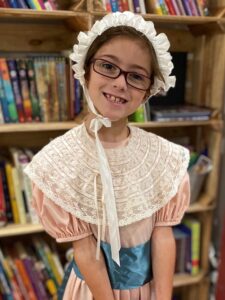 Harley Isabel Smith
Matthew 19:14 Jesus said, “Let the little children come to me and do not hinder them, for the kingdom of heaven belongs to such as these.”

Harley Isabel Smith is a 2nd grader who has been featured on TV as a philanthropist, has a heart for evangelism, and writes monthly for the Gazette’s Kidz Corner.

Visit https://harleyisabelsmith.com where she is constantly adding written and video content to entertain and educate children.