I recently spent a few days at Colt Creek State Park exploring part of its more than 5,000 acres of native Central Florida habitat. Before I include a few observations, I will provide a brief historical overview and list of the park’s amenities.

The acquisition of Colt Creek, on May 31, 2006, was a joint purchase between the Southwest Florida Water Management District, the Florida Department of Environmental Protection and Polk County Natural Resources division, with the Florida Park Service taking the role as the lead managing agency. The 5,067 acre parcel of land was purchased from the Overstreet family to become Florida’s 160th state park. Charlie Mack and his brother Stanley Chick Overstreet purchased the land from John Keen in 1940. Eventually Charlie Mack purchased his brother’s interest in the land and continued to operate it as a cattle ranch along with his son Mark.

The Overstreets used the land for beef cattle production, silviculture (growing and harvesting pine trees) and hunting. In the 1990s, the Overstreets engaged in a lime rock mining operation which included the digging of pits over 50 feet deep. The pits are now natural-looking lakes which provide additional habitat for numerous species of birds and aquatic plants and animals.

Why was this purchase so important? This land plays a key role within the floodplain of the Green Swamp region since the water that flows off the property eventually makes its way to four of Florida’s major rivers including the Withlacoochee, Hillsborough, Peace and Ocklawaha. Colt Creek features three tributaries to the Withlacoochee River: Little Gator Creek, Gator Creek and the park’s namesake, Colt Creek.

For bicycling, over 12 miles of trails that are accessible, mostly hard packed and grass covered, and mountain bikes are recommended.

The Lake Region Audubon Society did a year-long survey in 2007 identifying 150 species of birds and the following year the park was designated on the Great Florida Birding Trail.

Colt Creek State Park has 27 full-facility campsites and 6 tent only sites nestled in the pine flatwoods. Each site has 30 and 50 amp hookups. The equestrian campground is a primitive campground that has 10 sites that will accommodate horse trailers. Two primitive camps are also located at different locations along the Flatwoods trail that are only accessible by foot, horseback, or mountain bike.

I explored the creek bed of the dried-up Colt Creek. The resurrection ferns and other epiphytes were crying out for water, but it would be some time before the creek bed would fill up again.

Creek beds have always been a source of adventure for me. As I have written about in the past, I have spent many hours exploring Cowhouse Creek near the Hillsborough River during all times of day and seasons, from the arid to the flooded forests. I enjoy walking down creek beds to see what I can find and to experience a territory that would normally be inaccessible. It’s also a place where you can see the struggle of species to survive, although some hidden roots were buried and waiting for the magic of water and sun and nutrients to come alive.

Right in the middle of the creek was a bright green fern, raised up as if there was no insufficiency, perhaps having tapped into a source of water deeper than the other plants had access or simply in more fertile soil. The fern, sun-splashed and filled with vitality, was like a proud and boastful child standing up in the middle of a quiet library and providing a gleeful soliloquy of what he was reading, unaware that the status quo was to be silent like the others. The exuberant fern was surround by myriad, diminutive, curled up, and crinkled forms.

I went back to get my parked bike and moved it forward a couple hundred yards. I climbed a small mound of dirt and made my way towards the creek bed again. Just as I approached the top of the mound, I found myself eye to eye with a creature that certainly would appear rather monstrous to the smaller creatures in its realm, an oversized female golden orb spider stretched out in the center of concentric circles. The web was hooked in several places to 100 year old (or more) palmetto plants. Spiders and palmetto may have had these relationships for perhaps tens of thousands of years. As the spider casts a wide net for flying critters and sustenance, what’s in it for the palmettos? How long does the spider web last? The spider’s home is based on food but not much shelter from sun and wind. 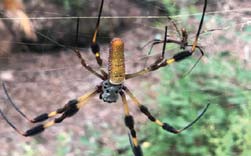 I tried to capture the spider with my camera, but as many know who have tried, it slips in and out of view, ghostlike, depending on what the camera wants to focus on, especially when the object is dangling and surrounded by branches and forest. I was able to get a couple decent shots. I took a few pictures of the spider with my cell phone, had a conversation with my fellow being, and moved down the mound to avoid damaging this amazing creation. When I looked at the picture on my cell phone later, I noticed there was a smaller spider of the same species buried near him in his web, most likely a male suitor that became a meal.

I found all kinds of wonderful tiny creatures, from jumping spiders to small caterpillars, and one found me. I felt something land on my thigh and looked down. It looked like a piece of lichen that had fallen out of a tree and found a home on my thigh. But then it moved. I lifted it up and put in on the picnic table where I was taking a biking break. It moved along at a rapid pace over the wood grains and across a heart that had been carved with a pair of initials inside. The love life of humans appeared to be of no concern. 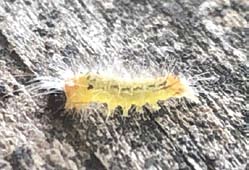 This was a junk bug, also called an aphid lion or lichen bug among other names and is in fact a larval insect known for carrying a load of debris around. But on close inspection, the debris is filled with the dead bodies of the junk bug’s victims. The junk bug is the larval stage of the green lacewing, delicate, with big eyes and diaphanous wings that float like fairies near the porch lights at night. From cold-blooded killer to angel–what a transformation! Not back-and-forth like Jekyll and Hyde but two distinct parts of one life form!

I spotted a walking stick on a pine tree. The tree formed a perfect backdrop, charcoal colored perhaps as a result of an ecological burn, so that the light brown insect could readily be examined.

As I biked back to my camping area, along the road there were gorgeous passion flowers—purple, green, white, and yellow in magical array.

Get out and enjoy The Great Florida outdoors!