The campaign to celebrate the nation’s fathers did not meet with the same enthusiasm–perhaps because, as one florist explained, “fathers haven’t the same sentimental appeal that mothers have.” On July 5, 1908, a West Virginia church sponsored the nation’s first event explicitly in honor of fathers, a Sunday sermon in memory of the 362 men who had died in the previous December’s explosions at the Fairmont Coal Company mines in Monongah, but it was a one-time commemoration and not an annual holiday. The next year, a Spokane, Washington woman named Sonora Smart Dodd, one of six children raised by a widower, tried to establish an official equivalent to Mother’s Day for male parents.

Paradoxically, however, the Depression derailed this effort to combine and de-commercialize the holidays. Struggling retailers and advertisers redoubled their efforts to make Father’s Day a “second Christmas” for men, promoting goods such as neckties, hats, socks pipes and tobacco, golf clubs and other sporting goods, and greeting cards.

Miners that were members of one of the rescue teams prepare to enter the slope entry to the Darr Mine, Van Meter, AP, following the mine gas explosion on Dec. 19, 1907. The crew entered and remained inside the mine for just two hours before being relieved by another team. 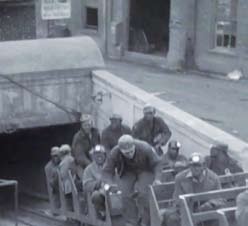 At 10:20 a.m., December 6, 1907, explosions occurred at the No. 6 and No. 8 mines at Monongah, West Virginia. The explosions ripped through the mines at 10:28 a.m., causing the earth to shake as far as eight miles away, shattering buildings and pavement, hurling people and horses violently to the ground, and knocking streetcars off their rails. Three-hundred and sixty-two men and boys died. It remains the worst mine disaster in the history of the United States.