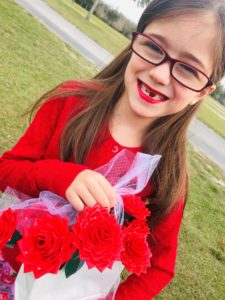 Hi! My name is Harley, and this month we’re going to talk about something that I did for charity. 😉 I made duct tape roses. Well, to be honest, me and Dad and Mom made them. This was back in February for Valentine’s Day, but I didn’t do the article featuring this then because I did Valentine’s Day.

I used my own money to buy the supplies. The money I spent was about $25. I bought red and green duct tape from Amazon. I also bought some Bendy Straws from Amazon. This purchase took about all that I had, because I only had one dollar left in my wallet after the duct tape roses. Now I have more money. We looked on YouTube to find how to make it, but we found quite a few duct tape rose projects so we chose one. I made a prototype, but it was made out of grey duct tape and it looked bad. But in the end the roses looked spectacular.

Me and my dad took them to church and we sold them in the Gatheria. Every Wednesday, they have dinner in the Gatheria, so we sold them to the people who were eating. Best part! We had five organizations that the money could go to. The people got to pick which organization that they wanted the money to go to. We sent the checks to the organizations that were picked, but I will tell you what the organizations are before I tell you about the checks. The three picked ones were RTS Missions, One More Child, and Oasis Pregnancy Care Centers. There are two others but nobody chose those. Then we sent the checks. $20 went to the RTS organization, $20 went to Oasis, and $15 went to One More Child. I received thank you cards from two of the three organizations, and a thank you post on Facebook from RTS Missions.