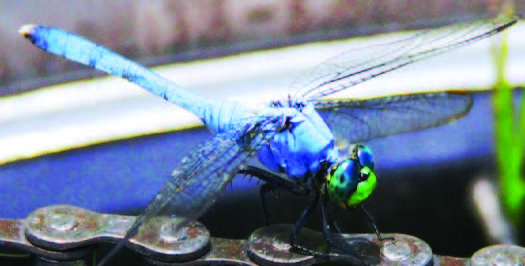 The blue dasher (Pachydiplax longipennis) is a very common and widely distributed dragonfly through the United States and into the Bahamas and is in the skimmer family. This beauty rested on my bike chain as I took a break from the trail. I believe dragonflies are quite curious, and it was looking at me with its compound eyes with nearly 360-degree vision and about 24,000 ommatidia (photoreceptor cells) in each eye as much as I was looking at it. Blue dashers live near still, calm bodies of water, such as marshes, ponds, slow-moving waterways, and ditches, preferring warm areas and low elevations. Adult blue dashers roost in trees at night.

The species name longipennis means “long wings”, but their wings are not substantially longer than those of related species. When examining a female, you may note she has a short abdomen that makes the wings appear comparatively longer. Males are easily identified, given their vibrant blue color, yellow-striped thorax, and metallic green eyes. Females are less colorful than the male due to sexual dimorphism. The female has a matching yellow-striped thorax, but their abdomen has a distinct brown and yellow striping that differentiates them from the male, along with contrasting red eyes. With age, both sexes develop a frosted color.

Dragonflies are carnivorous and capable of eating hundreds of insects every day, consuming up to 10% of their body weight each day in food, including nearly any flying insect such as mosquito, moth or fly. The dragonfly nymphs feed on aquatic larvae, small fish, and tadpoles.

Dragonflies and their relatives are an ancient group with the oldest fossils of 325 Mya from the Protodonata of Upper Carboniferous of Europe. The fossil record ends with the Permian–Triassic extinction event about 247 Mya. The group Meganeuropsis permiana included the largest insect that ever lived, from the Early Permian, with a wingspan of around 30 inches.

As a huge fan of biomimicry, I challenge you to find a species that we could use to model our flying machines after that is better than a dragonfly. Given that they are one of the first insects to inhabit this planet, they’ve had a long time to perfect the art of flying. What makes this spectacular flying ability? The dragonfly has two sets of wings with muscles in the thorax that can work each wing independently, allowing them to change the angle of each wing and demonstrate amazing aerial agility. It can hover in a single spot for a minute and fly in any direction, including sideways and backward. Eating is survival, and a dragonfly is the ultimate effective stealth predator, moving in on unsuspecting prey from any direction.

Where can you find these dragonflies?
Get out and look for them in the Great Florida Outdoors!
Dr. Norman is an advanced master naturalist graduate of the FMNP program from UF and a board-certified dermatologist based in Tampa and Riverview. He can be reached at 813-880-7546.