What do you do when you’re in the middle of the fire? Today we’re looking at a faith that’s tested in the lives of three teenage boys named Shadrach, Meshach, and Abednego.

King Nebuchadnezzar decides to make a giant statue and tell everyone in the kingdom, “You need to bow down and worship this gold statue,”

In Daniel 3:4-6, the herald shouts, “When you hear the sound of the horn… bow to the ground to worship King Nebuchadnezzar’s gold statue. Anyone who refuses to obey will be immediately thrown into the blazing furnace.” Everyone is bowing except for three teenage boys. 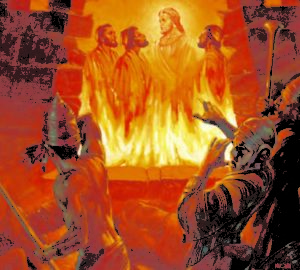 Let me share with you three qualities of faith as we navigate through the fire.

Everyone is bowing. Three boys are standing. The Scriptures say, “Shadrach, Meshach and Abednego replied to him, ‘King Nebuchadnezzar, we do not need to defend ourselves before you in this matter.’” Daniel 3:16

It would be so easy to rationalize compromise. They could have said to each other, “Bow down and pretend you’re worshiping this ridiculous statue. We’ll just fake it. Then tomorrow when we wake up with guilt – we’ll just ask God to forgive us.” How many times do we do that?

2. Faith believes in spite of what it sees.

“If we are thrown into the blazing furnace, the God whom we serve is able to save us. And He will rescue us from your power, Your Majesty.” Daniel 3:17

Maybe you’re financially insolvent. # 1. Sell the Sea-Doo. #2. You get a job. #3. You believe God is willing and able to be my Provider. We often allow the circumstances around us to define us.

But God is not confined to the things we see. He is able to do exceedingly and abundantly more than you would ever dare ask Him for. Our faith says that God is with us. What if God doesn’t do what you are believing for Him to do? Because that’s where some of us are living right now.

3. Faithful obedience is our responsibility. The outcome is God’s.

I believe God is able and willing… “But even if He doesn’t… we will never serve your gods or worship the gold statue you have set up. We will do what is right before God, and we will trust Him with the outcome.” Daniel 3:18

We know they’re going to be rescued. They didn’t, but their faith is unwavering. They know the goodness, the power, and the heart of their God.

The king orders the furnace be heated seven times hotter than normal. The Bible says the soldiers throwing the boys into the furnace died instantly on the outside of the furnace. “Then King Nebuchadnezzar was astonished… ‘Did we not cast three men bound into the midst of the fire? We see four men loose, walking in the midst of the fire they are not hurt, and the form of the fourth is like the Son of God. ’” Daniel 3:24-25

The Scripture says their robes weren’t even burned. But there was something that did burn. They were thrown into the fire bound… now they are loose.

The fire burned that which bound them.

Some of you are facing a fire right now –begging God to deliver you from suffering. Perhaps, the very thing you want God to remove from you is the very mechanism God wants to use to set you free? God will use all things to work together for His good.